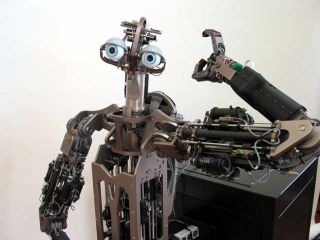 A new breed of robots could soon break free of assembly line duties to assist human living in myriad ways.

MIT researchers recently demonstrated the capabilities of such a robot, named Domo, which, like the robot in a recent General Motors ad, can transcend mass-production's repetition. It is designed to interact with humans and adapt to its environment in ways previously only imagined in science fiction.

Presently, Domo can identify objects, reach for them and place them on shelves. Unlike an assembly-line robot, Domo can sense its surroundings using a pair of video cameras for eyes; they are connected to 12 computers. The cameras are built into remarkably human-looking "eyeballs," for a reason, said Domo's developer, Aaron Edsinger.

"I found that, by making them immediately understandable as eyes, it was very easy to read [Domo's] eye-gaze direction, which is important when working with it," Edsinger said. "They also greatly increase people's comfort level with the robot."

Domo has been designed to tune into unexpected motion, allowing it to function within human environments. It is especially sensitive to human faces, which is necessary for social interaction. When Domo spots motion resembling a human face, the robot locks on it.

A recent demonstration showed off Domo's voice recognition capabilities. "Hey, Domo," Edsinger said, and Domo responded in kind. "Shelf, Domo," Edsinger said. Domo gingerly reached for a nearby shelf with an arm-like appendage of metal and wires, and touched the shelf to verify its existence.

Next, Edsinger placed a bag of coffee beans in Domo's other hand. By wiggling it and making optical measurements, Domo deduced the size of the object. Then Domo figured out how to transfer the bag from one hand to the other, and then placed the bag on the shelf.

A robot capable of such tasks may serve many useful purposes for the elderly or mobility-impaired, especially in light of aging Baby Boomers.

Edsinger, who has worked on Domo for the past three years, describes it as the "next generation" of MIT robots. Domo follows in the robotic footsteps of Kismet, designed for human interaction, and Cog, which had the capability of manipulating unfamiliar objects.

Don't touch me there

Unlike its predecessors, Domo also has the ability to sense touch, necessary for safe interaction with humans. Springs in its arms, hands and neck can sense force, allowing it to respond appropriately. Pushing its hand will make it move in the direction of the push.

"By placing that spring in there, you get physical compliance that makes the whole body sort of springy, which makes it safer for human interaction," Edsinger said. But too much force or moving Domo's arms in the wrong direction will produce a vocal response of "ouch."

Original funding for Domo came from NASA, and the project is now supported by Toyota, which could apply such a robot for assembly line production. Intelligent robots could work together with people to make workers more productive and save manufacturing jobs from being sent overseas, Edsinger said.

The name "Domo" was inspired by the Japanese phrase, domo arigato [thank you very much], Edsinger told LiveScience, and also by the Styx song, "Mr. Roboto." Also, the two strong syllables are easy for the speech recognition system to understand.