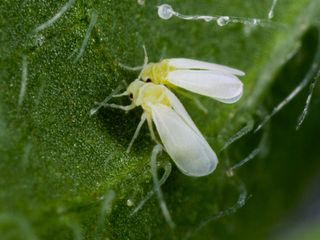 A bacterium that spread rapidly throughout the tiny whiteflies living in the American southwest has a complicated relationship with its new host. It appears to help mother whiteflies produce more offspring, but with a catch – more of them are daughters.

The whitefly's "frenemy" (a composite word describing a simultaneous friend and enemy) is a member of a group of bacteria called Rickettsia, and it infiltrated a subspecies of sweet potato whitefly in the southwest with amazing speed. In 2000, only 1 percent of whiteflies at sites in Arizona, New Mexico and California were infected with the bacterium, but by 2006, 97 percent of the whiteflies were infected. [The 10 Most Diabolical and Disgusting Parasites]

To better understand this relationship, a group of researchers raised infected and uninfected whiteflies in the lab and compared them. In some important ways, the infected whitefly mothers had a big advantage: They produced twice as many offspring, which developed faster and had a higher survival rate.

In the experiment, infected mothers produced roughly 25 percent more daughters than their uninfected counterparts. Since the bacterium is transmitted from mother to offspring, it's in the bacterium's interest to see more daughters; meanwhile, the whiteflies naturally prefer a 50/50 ratio.

"This is where the sort of tug-of-war or arms race, if you will, is," said Anna Himler, a research associate at the University of Arizona and the lead researcher. "It will be really interesting to see if the whitefly can regain control and bring the sex ratio of its progeny to around 50/50 … or whether the bacteria will remain in control of the whitefly reproductive system."

It's difficult to evaluate the benefits of infection against the potential problem presented by a shift in sex ratio; however, it's likely that, for the whiteflies, the benefits outweigh the cost, according to Molly Hunter, a study researcher and professor at the University of Arizona.

The researchers don't know how the bacterium manages to affect the whitefly's reproduction.

Sweet potato whiteflies are no stranger to living in close relationships with bacteria. Like aphids and other insects with limited diets, the whiteflies have a primary symbiont, or partner they rely on, that is thought to produce essential amino acids — the building blocks of proteins — that the whiteflies do not get from their sap-sucking diet. The other symbionts, like the Rickettsia bacterium, may offer the whiteflies a benefit, but they aren't necessary for life. These are called facultative symbionts, according to Hunter.

"It's really a menagerie of symbionts and what is really curious, is to a large extent we don’t know what these facultative symbionts are doing," she said.

This is not the first report of a symbiotic infection sweeping through an insect population; for example, a strain of the bacterium, Wolbachia, swept throughout the California population of a species of fruit fly. In fact, it is possible such rapid invasions are common, write the British researchers Francis Jiggins and Gregory Hurst in a commentary on the whitefly findings. Both pieces appear in the most recent issue of the journal Science.

The researchers write that these types of nonessential symbionts are changing how scientists look at insect evolution, because the symbionts bring with them the genetic code for traits that can substantially benefit their insect hosts.

A threat to crops?

Whiteflies are agricultural pests that suck the sugary juice out of plants, much like their relatives, aphids. Regardless of its name, the sweet potato whitefly is known to feed on more than 600 different plants. And even though the infected whiteflies appeared to have a significant advantage in the laboratory, Himler and Hunter said they have yet to hear reports of new problems for agriculture.

"There hasn’t been a cry that suddenly there are clouds of whiteflies again," said Himler, referring to a past surge in the population. "The fitness benefits we are seeing in the lab might be mitigated by natural conditions," preventing the skewed sex ratio from doing any real population damage.

The same bacterium has been found to infect the same subspecies of sweet potato whiteflies in Israel, but without offering nearly the reproductive benefits or any manipulation of the sex ratio.