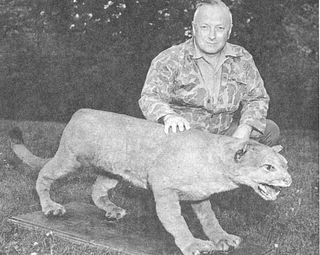 Bruce Wright, a New Brunswick, Canada wildlife biologist and author, with what is believed to be the last eastern puma. The puma was trapped in Maine in 1938 by a Canadian national. The preserved specimen resides in the New Brunswick Museum.
(Image: © USFWS)

The eastern cougar, a subspecies of North America's largest cat, was declared extinct by the U.S. Fish and Wildlife Service today (Mar. 2).

The official declaration comes after a long review process, during which the USFWS sought information on the long-elusive cats from scientists and consulted government authorities in the 21 states where the eastern cougar, also called the eastern puma, lived.

The USFWS found that the cats occasionally spotted in the eastern cougar's former range were actually other cougar subspecies — often South American — that had escaped or been released from captivity, as well as wild cougars of the Western United States that had migrated east.

According to Mark McCollough, the service's lead scientist for the eastern cougar, the cat has likely been extinct since the 1930s.

The USFWS said it will prepare a proposal to remove the eastern cougar from the endangered species list.

The eastern cougar once roamed from Maine to South Carolina and as far west as Michigan and Tennessee, preying primarily on white-tailed deer. The cougars also hunted eastern elk, a species that disappeared in 1880, and smaller mammals.

With red- or gray-brown coats, eastern cougars were large and agile cats. Including their tales, males could grow up to 8 feet (2.4 meters) long and weigh around 140 pounds (63.5 kilograms).

The USFWS decision to declare the eastern cougar extinct does not affect the status of the Florida panther, another wild cat subspecies listed as endangered. Only one breeding population of between 120 and 160 animals remains in southwest Florida.