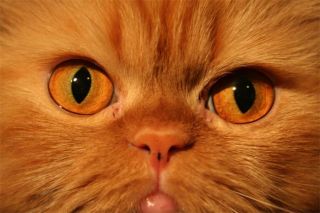 A microchip the width of a pencil eraser shows promise in helping blind cats see again.

Starting in July, Kristina Narfstrom, a veterinary ophthalmologist at the University of Missouri-Columbia implanted the microchips [image] into the eyes of 11 Persian cats, half of which were severely visually impaired or blind. Preliminary follow-up showed the microchips were working well and the cats are healthy.

A small percentage of Persian cats suffer a hereditary eye disease, in which the light-detecting cells in the retina don’t develop and render the cats blind at just weeks-old. Narfstrom also studies Abyssinian cats with a retinal disease very similar to a human retinal disease that affects about 1.5 million people worldwide and which eventually leads to blindness.

Currently, there is no cure for the cat- or human-variety of eye disease. While other retinal implants have been developed, this one has some advantages.

“The good thing about this device that we’re using is that it doesn’t have any wires to it," Narfstrom told LiveScience. "So it’s like a small disk that is very inert and not so traumatic to the eye that we slide into the retina.”

The retina is made up of three layers of cells, the outermost of which contains the rods and cones. These cells capture incoming light and transform it into electrical signals that get sent ultimately to the optic nerve and brain to form an image.

The microchip implant [image] replaces the dead rods and cones. The implant is dotted with several thousand micro-photodiodes [image], which react to light and produce small electrical impulses in parts of the eye’s retina.

Since a cat's eye is very similar to a human eye in size and anatomy, Narfstrom hopes surgeons can use the same techniques and equipment in humans with the eye disease. In fact she said, to date, the microchip has been implanted in 30 humans and has shown positive results.

Next, Narfstrom will conduct the implant surgeries on Abyssinian cats.