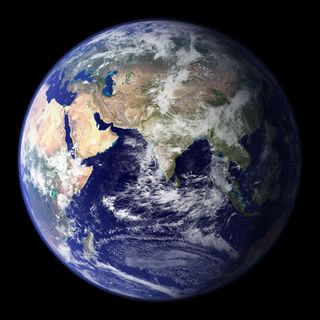 The world's discharge of carbon dioxide, a major contributor to global warming, could reach record highs this year, according to a new study.

The culprit: a recovering economy, the researchers say.

Scientists from the University of Exeter in the United Kingdom, along with the University of East Anglia, also in the U.K., and other institutions, found that despite the financial crisis last year, global carbon dioxide emissions from the burning of fossil fuels in 2009 were just 1.3 percent below the record 2008 figures. That's less than half the drop predicted last year.

For example, United Kingdom emissions were 8.6 percent lower in 2009 than in 2008, with similar decreases in the United States (6.9 percent), Japan (11.8 percent), Germany (7 percent), Russia (8.4 percent) and most other industrialized nations. But China showed an 8-percent increase in carbon dioxide emissions, while India's emissions increased 6.2 percent in 2009, and South Korea's went up 1.4 percent.

Last year, the scientists had projected a 2.8-percent reduction in carbon dioxide emissions, basing their calculation on a forecast from the International Monetary Fund for GDP. They also assumed the fossil fuel emissions per unit of GDP would continue to improve.

The projection was wrong for two reasons, the scientists report online Nov. 21 in the journal Nature Geoscience: First the decrease in GDP was lower than forecast in October 2009. Second, the amount of carbon released per GDP didn't improve as much as expected, due to an increased share of the emissions coming from emerging economies with a relatively high carbon intensity and increasing reliance on coal, according to lead author Pierre Friedlingstein, of the college of engineering, mathematics, and physical sciences at the University of Exeter.

Friedlingstein's team projects that if economic growth proceeds as expected, global fossil fuel emissions will increase by more than 3 percent in 2010, approaching the high emissions growth rates observed through 2000 to 2008.