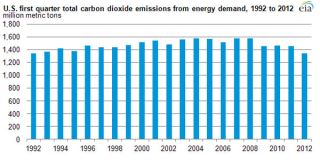 Carbon dioxide emitted by the United States reached its lowest level since 1992 earlier this year, according to a U.S. Department of Energy report.

A shift in fuel from coal to less carbon-intensive natural gas, is partly responsible, as was the unusual warm winter, the Energy Information Agency reported.

This shift in energy use is part of a trend toward the use of natural gas in the United States, said A.J. Simon, an energy systems analyst at Lawrence Livermore National Laboratory in California.

"It's been coming for a while, but it has accelerated significantly in the last couple of years," Simon said. [Top 10 Alternative Energy Bets]

As for temperature, typically, the first three months of the year — those assessed in the report — constitute the most energy-intensive time of the year, because of demand for heat from fossil fuels in the deep winter months. But this year, the continental United States saw its fourth warmest winter on record.

Carbon dioxide emissions are also dependent on the economy, with a stronger economy associated with more of the greenhouse gas. Since the recession, starting in 2007 and 2008, U.S. carbon dioxide emissions have been declining on a somewhat jagged course, sometimes buoyed upward by growth, according to Simon.

The slowed economy plus a move toward more fuel-efficient vehicles drove a reduced demand for gasoline, which in turn, reduced emissions, he told LiveScience.

Carbon dioxide emitted by the burning of fossil fuels, including coal, oil and natural gas, accounts for nearly 60 percent of humans' greenhouse gas emissions, according to the 2007 report by the Intergovernmental Panel on Climate Change.

Nearly all of the excess carbon dioxide emitted in the United States comes from energy-related uses, such as power plants, cars and airplanes, and oil-heated homes. Carbon dioxide is the primary greenhouse gas.

When used to generate electricity, natural gas produces about half the carbon dioxide as coal, he said.

The price of natural gas has dropped as natural gas from shale rock has become available through a technique called hydraulic fracturing. Hydraulic fracturing, which uses water and other substances to create cracks in rock formations permeated with natural gas so it can be extracted, is controversial because it has the potential to pollute water sources.

"Given how much shale gas is underground and given technology to extract shale gas is getting better every day, the expectation is the price will rise from where it is today, but should level off whereby it makes gas much more price competitive with coal," Simon said.

Natural gas prices are expected to level off at about $4 to $5 per gigajoule, a little less than twice its current range, he said.

Changes with the weather

However, one of the other factors behind the drop in emissions — the unusual weather — may mean this trend won't continue.

Six months from now, when all the energy data from this past summer is available, it's likely this summer saw higher carbon dioxide emissions than the past couple of summers, Simon said. The reason, the power needed to keep much of the nation cool during a summer that featured the warmest month on record — July —for the continental United States.

This may represent an even longer-term trend, he said.