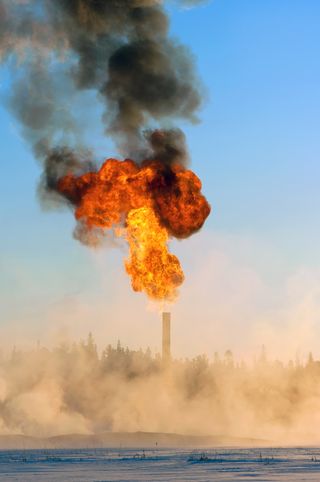 Waste gas is flared, or burnt off, during oil production, as shown above. This is process emits carbon dioxide, the most prominent greenhouse gas.
(Image: © Leonid Ikan | shutterstock)

International talks to address human-caused global warming began 20 years ago in Rio de Janeiro. But despite attempts to curb emissions of the greenhouse gases responsible, they have continued to pour into the atmosphere since then.

Last year was no exception.

In 2011, the burning of fossil fuels, as well as other activities such as cement and oil production, produced 3 percent more carbon dioxide in 2011, bringing this segment of emissions to an all-time 37.5 billion-ton (34 billion-metric tons) high that year, a European analysis reports.

The past decade has seen a 2.7 percent annual increase in carbon dioxide emissions. China, the United States, the European Union, India, the Russian Federation and Japan rank as the top five emitters, from highest to lowest.

Last year's increase was driven by China and India, which saw their carbon dioxide emissions jump by 9 and 6 percent, respectively. Meanwhile, emissions from the European Union, the United States and Japan all decreased, according to the report, Trends in Global CO2 Emissions.

"Although all developing countries together increased their emissions on average by 6 percent, the increases in China and India caused by far the largest increase in global emissions," the report notes.

The report, by the Netherlands Environmental Assessment Agency and the E.U.'s Joint Research Centre, does not include carbon dioxide emitted by deforestation, forest fires and other land-use related activities. These sources could potentially add between 10 and 20 percent to the carbon dioxide emission figures, the authors write.

The authors also note that renewable energy technology, such as solar, wind and biofuels, accounts for a small share of energy sources; however they found its use is accelerating.

If global emissions of carbon dioxide continue to increase at their current rate, within two decades they will exceed the amount necessary to limit global warming to 3.6 degrees Fahrenheit (2 degrees Celsius), the target established in international negotiations, the authors of the report write. [How 2 Degrees Will Change Earth]

In late November and early December, international climate negotiators will converge in Doha, Qatar, to continue chipping away at this monumental problem.

Projections indicate limiting warming to 3.6 degrees F (2 degrees C) by 2100 will avert the worst of the many potentially devastating impacts of climate change, including sea-level rise, extreme weather and extinctions. However, scientists worry that this goal is becoming increasingly unrealistic as time passes.

While carbon dioxide is the primary gas implicated in human-caused global warming, other gases, such as methane and nitrous oxide, also contribute. These were not included in the report.