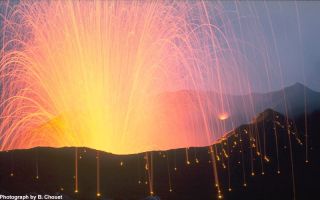 A Stromboli volcano erupts in 1969. Eruptions are eye-catching, but humans have a bigger environmental impact, a new research review finds. In three to five days, we put out the same amount of carbon dioxide it takes all the world's volcanoes to produce in one year.
(Image: © Photograph by B. Chouet)

Explosive volcanic eruptions might be attention grabbing, but a new review of research finds that their environmental impact pales in comparison to human activities. According to the research, humans put out the same amount of carbon dioxide in three to five days that all of the volcanoes on Earth put out in one year.

For instance, here are a few carbon-emitting human activities and their carbon-dioxide outputs:

Present-day human carbon emissions could even exceed the CO2 output of several supervolcano eruptions, including the giant eruption that will eventually occur at Yellowstone National Park, Gerlach wrote in the American Geophysical Union's newsweekly Eos. These mega-eruptions are very rare, with the last one occurring 74,000 years ago in Indonesia.

In fact, to scale up volcanic emissions to an equivalent of what we release would require the release of more than 200 cubic miles (850 cubic kilometers) of magma per year, the researchers calculate. For comparison, Lake Ontario holds about 393 cubic miles (1,640 cubic km) of water.