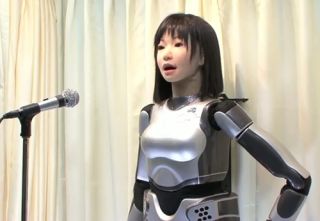 A screenshot of fembot singing.

A bag of microchips that's just been opened on the Japanese market. Japan’s National Institute of Advanced Industrial Science and Technology has taken their humanoid robot, HRP-4C, and pushed it even closer to human-ness by granting it the power to dance. The new model is nicknamed "Divabot."

Now, Divabot was never designed as a deadly assassin robot. But with a little bit of mechanical know-how and elbow grease, I should be able to turn this charming robotic curiosity into a deadly seductress, ready to pick secret agent flies out of my world domination ointment. What better use could there be for a dancing robot?

When it was unveiled in March 2009, the robot could make simple body movements and simulate speech. These skills are certainly important for a humanoid robot that is attempting to resemble a human.

But when a robot really needs to pass itself off as human (which it does if it's trying to seduce a secret agent), it needs to know how to dance. After all, who knows when your secret agent target will take your robot by the hand and try to whisk it off its feet? Secret agents, from my own experience, tend to be romantic and spontaneous. An assassin robot must be prepared for every potentiality.

Thanks to Japan's National Institute of Advanced Industrial Science and Technology, this robot will be prepared to dance along. In a display of its rhythmic abilities, Divabot led a troupe of dancers in a song-and-dance number on stage at Tokyo’s Digital Content Expo last month.

Unfortunately, Divabot doesn't dance on its own; a programmer must teach it all its moves. But the interface for teaching new steps is so simple that any mad scientist could easily teach the robot the key steps.

Divabot can even imitate facial expressions. The faces it uses in this dance number were recorded from a real singer, whose voice and breathing patterns were likewise imitated in the performance.

With the alluring Divabot at my side, I should be able to easily distract any secret agent who comes too close to foiling my schemes. Can't you just imagine the success? The robot winks at the spy from across the room, they dance cheek to cheek, then my Divabot sprays poison gas from its cybernetic eyes and the secret agent is no longer a threat to my schemes. It's a modern fairytale!

Mad scientist Eric Schaffer has one index finger on the "fire death ray!" button and his other index finger on the exciting pulse of scientific research. His accounts of diabolical machinations, as well as research breakthroughs, appear regularly on LiveScience.