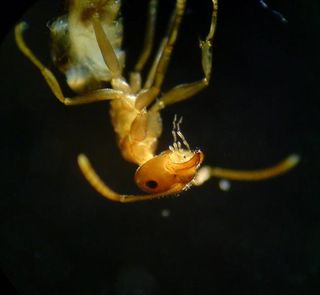 A survey of street medians in New York City recorded 13 species of ants, including Cornfield ants, like this one.
(Image: © Marko Pećarević)

NEW YORK—Manhattan's ant population – much like its human inhabitants – is diverse, even in the most unlikely places.

Medians on three major streets can contain fruity-smelling ants that nest in pavement; ants that farm aphids as if they were cattle; predatory, colony-raiding ants; forest-dwelling ants imported from Asia; and a species with dangerous stings. These mug shots of city ants came from a recent survey in which entomologists recorded 6,619 individual ants of 13 species on 44 medians. [Infographic: The Life of an Ant]

The results highlight the importance of conserving small ecosystems, according to study researcher James Danoff-Burg, a researcher at Columbia University in New York.

"Even in these areas that we don't pay attention to, these areas we don't think there is any ecological value to … those are still seen as habitat by some organisms," Danoff-Burg said.

Of the 13 species they reported, 10 were born and raised in the United States. "That's an amazing number of native species," he said.

For the benefit of a visitor, Danoff-Burg picked a median here on Broadway to demonstrate an ant-finding technique similar to that used in the study by his collaborator and former student Marko Pećarević. Regardless of the taxis, buses and cars whizzing by only feet away, the greenery here made for good habitat.

"If you look around here, there's pretty good plant biodiversity," he said, pointing out the low-growing plants, such as clover, growing alongside shrubs and various trees. These create habitat for a variety of herbivores and pollinators, which in turn, provide food for ants. A garbage can nearby was also a plus for the ants.

After sifting through a handful of dirt, he used a device called an aspirator to suck two tiny yellow ants through a straw and into a vial. These were thief ants, Solenopsis molesta, relatives of fire ants that have earned their name by stealing food from other ants.

When conducting the actual survey, Pećarević, a former graduate student at Columbia, set traps fashioned from plastic cups and sifted through soil by hand to collect ants for their study published in the journal PLoS ONE on Oct. 5. Robert Dunn, from North Carolina State University, was the study’s third researcher. Now living back in his native Croatia, Pećarević said at first he felt self-conscious crawling around on medians on Broadway, Park Avenue and the West Side Highway.

"It's very curious that nobody really was watching me as I was doing that, nobody was showing any interest in what I was doing except maybe a bus driver or a grandmother," Pećarević said. "I even had police cars standing right next to me."

Danoff-Burg added, "The funny thing about doing biology in New York City is you kind of take advantage of the feigned (indifference) of New Yorkers. In rural situations, people will have no problem coming over to ask me what I am doing."

Pavement ants, Tetramorium caespitum, were by far the most common creature. On an individual basis, they accounted for almost 53 percent of the ants collected. They are an invasive species, which naturally nests in soil, but if there's not enough of that, they will take to cracks in cement, pavement or bricks, according to Pećarević.

In a natural environment, it's unlikely that one species would be so dominant, according to the scientists.

With the help of 550 undergraduates a few years ago, Danoff-Burg conducted a survey of ants living in city parks, and found 24 species, seven of which also appeared in this more recent work, a surprisingly small overlap, since he expected the parks to contain all of the species found on medians. In natural areas with more complex ecosystems, ant colonies are larger and burrow deeper into the ground. They can exist for years, even decades, in the same spot, and the ants that inhabit them tend to be larger.

"The medians are a more ephemeral situation," he said.

A cast of characters

The cornfield ant, Lasius neoniger, a native that feeds on the sugary nectar secreted by the aphids it tends, was the second most abundant ant surveyed, followed by the thief ant and then by Nylanderia flavipes, a species thought to have been imported from Asia, potentially from Japan. On one median, Pećarević also found four Asian needle ants. Formally known as Pachycondyla chinensis, this species has a sting that can cause anaphylactic shock, a severe allergic reaction, and it is known to live in the southeastern United States.

However, the Asian needle  ant does not appear to have moved to New York for good. A year after he collected those four ants, Pećarević returned to the same median, but couldn't find any of the species.

New York City medians' ant populations, however, are not entirely unique. Of six similar surveys conducted elsewhere in North America, all but one — conducted in the Lake Tahoe basin — found at least one similar species.