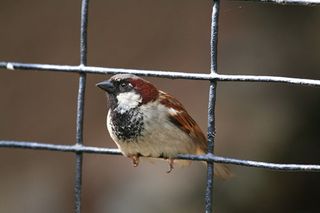 House sparrows are one of the most abundant birds in North America, found everywhere from New York to Los Angeles.
(Image: © Xavier Marchant/dreamstime)

Birds that hang out on stoops and city streetlights have to deal with a set of challenges that feathered friends in more natural landscapes never encounter.

"The urban habitat is usually more severe than the habitats these birds historically occupied," said study team member John Wingfield of the University of Washington. "Urban habitats aren't easy, so the birds have to have developed coping mechanisms."

To find out which kinds of birds thrive in city environments, the researchers sent out questionnaires to ornithologists, biologists and birdwatchers all over the world that asked them to list the 10 most common native breeding birds found in their cities.

The responses named 217 urban bird species from 73 of the world's largest cities and 247 rural species. (Rural species were defined as those that did not breed in human-disturbed areas, such as towns and cities, and those for which their natural distribution overlapped with the area of at least one large city, implying they had lived there before humans moved in.)

Some less common species found in cities included the black-tailed trainbearer, a tiny hummingbird in Quito, Ecuador; the green bee-eater found in Giza, Egypt; and a small bird called the broad-billed tody that lives in Santo Domingo, Dominican Republic.

The research showed that worldwide, urban birds could endure a far broader range of environments than those which only lived in rural areas. Their elevation ranges were more than 1,600 feet broader and their distribution covered about 10 degrees more latitude, or 700 miles.

What gives city birds an edge over their rural relatives isn't known, but previous studies have shown that they have found ways to keep their stress levels down in the face of blaring horns and jackhammers and have changed their songs to make themselves heard over the din.

The new study's findings, detailed in the online edition of the journal Biology Letters, could be used to fine-tune conservation efforts by helping to identify the species that are least capable of dealing with an ever-changing and developing world.