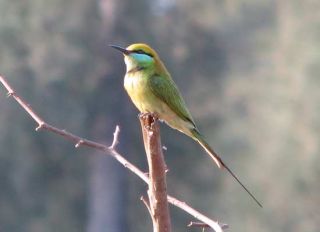 A Green Bee-eater from India.
(Image: © stock.xchng. No usage restrictions.)

At least 400 species of birds could become endangered within the next 50 years as a result of global warming and changes in land use, a new study finds.

Climate change and the destruction of habitats through deforestation and the conversion of grassland to cropland have already pushed many species to extinction, and the process will only accelerate over the next century, the authors of the study said.

The extinction count grows much higher at the turn of the next century, they said.

“We found in our study that under certain assumptions by the year 2100, 950 to 1,800 bird species may be imperiled or even driven to extinction by climate change and habitat destruction,” said lead author Walter Jetz of the University of California, Davis. “Most of these species are currently not recognized as imperiled.”

These estimates were made by combining projections of future global warming, agricultural expansion and human population growth from the Millennium Ecosystem Assessment and were detailed in the online journal PLoS Biology.

They were also based on the assumption that birds won’t dramatically shift their ranges in response to a changing climate.

Climate change will be the primary driver of extinctions at higher latitudes, as suitable habitats begin to shrink, the authors state.

For tropical birds, direct habitat destruction will be more of a problem: birds in tropical climates tend to be highly specialized to small habitat ranges. As soon as their home is gone, they have nowhere to go.