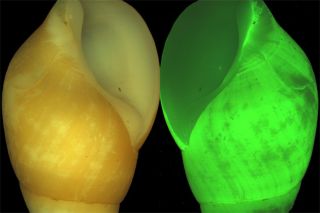 This marine snail, Hinea brasiliana, produces bright green flashes of light like an alarm when other creatures rub past its shell.
(Image: © D. D. Deheyn.)

Tracing the mysterious green flashes of light produced by a sea snail has revealed a creature built to shine from the inside – and with a shell that may be designed for communication as well as protection.

Typically found in tight clusters or groups at rocky shorelines, the clusterwink snail, or Hinea brasiliana, was known to produce light. But scientists like Dimitri Deheyn assumed the sea snails did their light thing just like their pals on the land. Terrestrial snails produce a glowing light from their foot when it's sticking outside the shell.

Nerida Wilson of the Australian Museum in Sydney was working with the Hinea snail when she noticed these bright flashes and not the usual snail glow, so she contacted her colleague Deheyn, of the University of California-San Diego’s Scripps Institution of Oceanography, and sent him some snails. [Sea Creature Releases Glowing Decoy 'Bombs']

The first difference he noticed upon receiving them was that, instead of glowing continuously, they produced light flashes that occurred only when touched.

Not only that, but when the snails retreated into their shells, as snails normally do when startled, they  continued to produce light – light that you could see on the outside of the shell.

The flashes are super-fast, Deheyn said, pulsating once every hundred milliseconds or less. And as long as you keep tapping the shell, the snail continues its psychedelic outpouring. "I have records of light flashes for like a half-hour, just flashes, flashes, flashes," Deheyn told LiveScience.

The researchers ran lab experiments to look for the light switch. Unlike land snails that secrete luminescent mucus, the Hinea snail relies on a chemical reaction that occurs deep inside its body beneath the shell, Deheyn’s team found.

The researchers discovered tiny structures in the mantle that seem to be specialized to produce light.

"What we have observed is that the shell is able to diffuse out the light that comes from the inside," Deheyn said. However, it works "only for the color of the bioluminescence ." Lab tests showed that light in the red wavelengths, for instance, wouldn't shine through the shell; only the blue-green light would, suggesting the shell and bioluminescence co-evolved.

This diffusion amplifies the luminous display. The feat may allow the animal to communicate while remaining safe inside its hard shell, the researchers said.

Deheyn said the researchers are now looking into the properties of the shell that allow it to diffuse certain wavelengths of light and with such efficiency. The results could have implications down the line for diffusing materials used in photography and other industries.