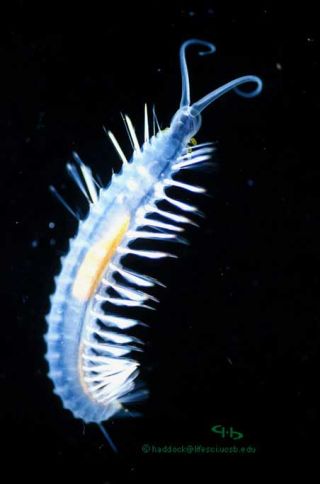 One of a new species of "green bombers" (Swima bombiviridis) collected from Monterey Bay. The animals release bioluminescent sacs that may serve to distract predators. Several of these sacs are visible near the animal’s long coiled head palps.
(Image: © © 2001 S.H.D. Haddock)

A newly discovered species of deep sea worm releases tiny balloon-like structures that glow in the dark to distract predators, scientists have found.

Researchers using undersea robots pulled up seven new segmented worm  species belonging to a whole group of critters never seen before. Five of these species appear to cast off glowing bombs intended to throw off fish on the lookout for dinner.

"It was very exciting to see them and realize that they were very different from species we've seen before," said lead researcher Karen Osborn of the Scripps Institution of Oceanography in La Jolla, Calif. "We think they're using the little bombs as decoys to escape predators."

Liberating part of one's body as an escape tactic is rare, but not unheard of, Osborn said. Some squid and brittle stars (which are similar to star fish) have been known to cast off an arm to avoid being eaten.

In this case, the balloon bombs seem to be made of modified gill parts, and only glow once they are ejected from the worms, apparently to distract predators' attention.

Glowing in the dark

The scientists dubbed the new group Swima bombiviridis ("Swima" meaning that they are good swimmers, and "bombiviridis" translating to "green bomber" in Latin). They announced the finding in the Aug. 20 issue of the journal Science.

The agile swimmers use comb-like bristles on their body as paddles to propel them through the water. Most species in the group live at about 3,000 meters (1.9 miles) below the sea surface, though some reside in shallower waters at 1,900 meters (1.2 miles) deep.

At these depths, the ocean is extremely cold and completely dark, except for the occasional glow of a living creature. This kind of glow-in-the-dark ability is called bioluminescence, and is actually quite common among animals living in this region of the sea. Bioluminescence is sometimes used for communication between individuals of a species, or to attract prey.

Osborn and her colleagues found Swima bombiviridis in seas off the coast of the Philippines as well as near the west coast of the United States and Mexico.

"They're very common where we've looked," Osborn told LiveScience. "We actually believe that if we were to take submersibles to other areas that we would probably find more of these species."

In fact, she said there are so many undiscovered species in the ocean that she and her team find some on practically every dive.

"It's really cool to look at them, but it's also really frustrating," she said. "Probably half of the animals we look at are undescribed. You have to pick and choose which you're going to pay attention to."

The scientists are eager to learn about as many as new species as possible, especially with some species being threatened by changing climates and environmental conditions.

"The difference of this whole new group is a good example of all the things we have left to learn about the deep sea," Osborn said. "As biodiversity gets threatened we would hate for us to lose diversity before we ever know that it exists."