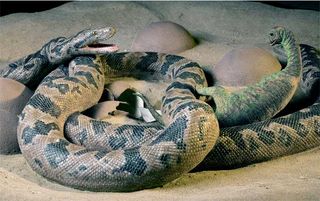 This is life-sized reconstruction reveals what may have been a baby dinosaur's last glimpse, just before a giant snake devoured the hatchling. The window into the past was made possible by remains of an ancient serpent coiled around crushed dinosaur eggs.
(Image: © Sculpture by Tyler Keillor and original photography by Ximena Erickson; image modified by Bonnie Miljour.)

The last thing hatchling dinosaurs might have seen were giant snakes, researchers say.

Scientists found the nearly complete remains of an 11-foot-long, 67-million-year-old serpent coiled around a crushed dinosaur egg right next to a hatchling in the nest of a sauropod dinosaur, the largest animals to have ever walked the Earth.

"We think that the hatchling had just exited its egg, and that activity attracted the snake," explained researcher Dhananjay Mohabey, a paleontologist at the Geological Survey of India. "It was such a thrill to discover such a portentous moment frozen in time."

The site that yielded the snake — dubbed Sanajeh indicus, or "ancient-gaped one from India" — was located near a village in Gujarat in western India. It was a rich nesting ground for sauropods known as titanosaurs, with evidence for hundreds of egg clutches, each containing about six to 12 round, spherical eggs. Two other instances of fossil snakes found with these clutches suggest the newly described serpent species made its living plundering nests for young dinosaurs.

"It would have been a smorgasbord," said researcher Jason Head, a paleontologist at the University of Toronto at Mississauga. "Hundreds or thousands of defenseless baby sauropods could have supported an ecosystem of predators during the hatching season."

The dinosaur eggs likely were laid along the sandy banks of a small, quiet tributary and covered afterward by the mother with a thin layer of sediment. These dinosaurs did not seem to look after their young — no evidence for adults has been found at the site.

The fact the bones and delicate structures, such as eggshells and the snake's skull, are arranged in anatomical order (as they would appear in real life) points to quick entombment of a serpent caught in the act, as opposed to them all getting washed together after they died.

"Burial was rapid and deep," said researcher Shanan Peters, a geologist at the University of Wisconsin. "Probably a pulse of slushy sand and mud released during a storm."

Although the titanosaurs were probably some 60 feet long (18 km) as adults, the hatchlings were likely roughly 18 inches long (46 cm), and the snakes were probably more than large enough to devour them.

It may be that one of the motivations evolutionarily speaking for dinosaurs getting big quick is to get out the danger zone of predators like this snake," explained researcher Jeff Wilson, a paleontologist at the University of Michigan. "After their first year, they might be about 2 meters long (6 feet), too big for this snake to take in."

"Many paleontologists in the early part of the 20th century thought dinosaurs followed a reptilian growth trajectory, growing slowly and living up to 60, 70, 80 years old," Wilson said. "More recent research suggests they actually grew very fast, reaching say three-fourths of adult body size in their teens and living to 30 or 40 years old."

The snake probably didn't eat any intact dinosaur eggs at the site — at more than 6 inches (15 cm) in diameter, they were too wide for its mouth. Still, the Mexican burrowing python (Loxocemus bicolor) is known to constrict sea turtle eggs until they break and then dine on the contents, so eggs might have been on the menu for this ancient snake as well, the researchers noted.

Mohabey initially discovered the snake in 1984. As he worked on the inscrutable specimen, he recognized dinosaur eggshell and limb bones but had thought the vertebrae belonged to the hatchling as well.

In 2001, Wilson visited Mohabey at his office in India and was astonished after examining the specimen, identifying the vertebrae as belonging to a snake looped around the egg.

"To find a snake adapted to waiting and feeding on hatchling dinosaurs is so striking," said vertebrate paleontologist Mike Benton of the University of Bristol in England, who did not participate in this study.

An international paleontological team that Wilson and Mohabey led meticulously prepared the fossil and investigated the original site in India.

"The true significance has been worked out after a great deal of painstaking work in removing rock matrix from the specimen," Benton noted. "The preparation process was crucial so the researchers could make sure they didn't miss any fine detail in the sediment."

"It's important that people realize you don't just dig up a fossil like this, and say 'wow.' Jurassic Park had it all wrong," Benton added. "The process of discovery is laborious and time-consuming, and most people would lack the tenacity."

The fossil's scientific name comes from its lizard-like gape, which yields critical insights into how snakes evolved. Most modern snakes are able to eat large prey, because they have mobile skulls and wide gapes, adaptations absent in the earliest snakes that appeared some 98 million years ago.

"The main thing that allows a large-mouthed snake or macrostomatan to make its mouth so big is how its jaw joint is positioned well behind its head," Wilson explained. "If you feel where your jaw joint is at in your head, imagine moving that hinge a half-foot back and then picturing if your head could go that far back when you open your mouth. That's what a large-mouthed snake can do."

Still, this fossil snake bears some traits of modern large-mouthed snakes, such as joints that allow its jaw to flex downward some, "allowing them to devour prey larger than previously thought possible for early snakes, such as dinosaurs," Wilson added.