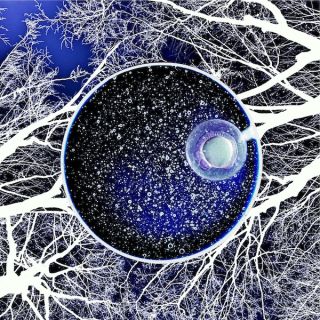 This compilation photo shows a zebrafish embryo (in purple) superimposed on a background representing a branching family tree of genes.
(Image: © Vanja Solin and Andreas Hartl)

Most of the time, new discoveries catch our eye because of important results or fun findings. Other times, we just want to look at pretty pictures.

This dreamy illustration of a zebrafish embryo happens to be attached to some cool research. [View: Zebrafish Embryo] The compilation photo reflects a centuries-old observation that during a certain point in a vertebrate embryo's development, the embryo will look just like embryos of other vertebrates. The concept is known as the "developmental hourglass." Embryos look alike in the middle of development, but early and late in development, the embryos' appearances diverge, just as an hourglass flares out from its narrow "waist."

It's a controversial idea, mostly because it depends so heavily on what we can observe with the naked eye. As any scientist will tell you, there's a lot more going on than that. Two papers published today (Dec. 8) in the journal Nature dig right in.

It seems there's more going on in the developmental hourglass than meets the eye.

Not to be outdone by the zebrafish researchers (more on them in a minute), the fruit fly researchers put together a mosaic of their fruit fly embryo images.

In the second study on the developmental hourglass, researchers from Max Planck Institute for Evolutionary Biology took a closer look at the embryos of the tropical zebrafish. These researchers figured that any new path taken by anatomy must be mapped out by genes, so they decided to investigate the evolutionary ages of the genes expressed during development. Genes that popped up earlier in the zebrafish's evolution should be shared by more species, while newer genes will appear on later branches of the evolutionary tree. The branching development of genes is represented in the background of the researchers' compilation photo.

The researchers parsed the genetics of zebrafish embryos (seen in the compilation photograph in purple, floating in a bubble-like egg) and found that the oldest set of genes was most active during the "waist" phase of the developmental hourglass. In other words, at the point when embryos look most similar, they're expressing the most common genes.

Although they had fewer data points for other species, the researchers found similar trends for fruit flies, the roundworm C. elegans, and mosquitoes.

If this molecular confirmation of the developmental hourglass holds, researchers will have to explain why these genes are conserved across species, according to an editorial piece accompanying the papers. We hope it involves more pictures.