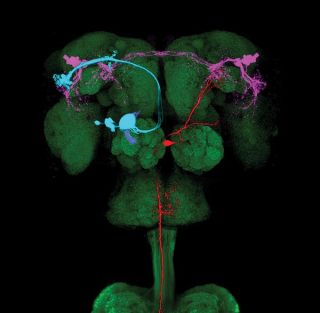 When a fruit fly sniffs out a chemical scent, the signal travels to its little brain where a newly discovered circuit quickly transforms that information into a physical response. The feat takes just four neurons, researchers say.

In addition, the circuit differs between male and female fly brains, suggesting that gender-related behaviors arise not from what the flies sense, but from how they process those signals. [See the colorful fruit fly brain circuit]

Because fruit flies are model organisms for biological research, the findings could help scientists understand brain connections in other organisms.

When fruit flies are in the mood for courtship, they communicate using chemical signals called pheromones. One of these signals, 11-cis-vaccenyl acetate (or, more simply, cVA), elicits very different responses in male and female flies. Males become aggressive and less interested in mating in response to cVA. Females become receptive to males' advances.

"Somehow the processing of this pheromone signal within the brain must be different, so that it can allow this same signal to have different outcomes in both males and females," study researcher Vanessa Ruta, a postdoctoral fellow at Columbia University in New York, told LiveScience. Ruta and her colleagues reported their work today (Dec. 1) in the journal Nature.

The researchers knew that both males and females detect cVA with sensory organs in their antennae. So they developed a new technique to help them trace the path from those sensory organs into the brain. The flies were genetically engineered so their neurons would fluoresce bright green when exposed to pulses of light. Next, the researchers focused light on the sensory neurons, illuminating their connections with the next chain of neurons.

By measuring electrical signals, the researchers confirmed that the neuron's neighborliness was no coincidence: Not only were the cells anatomically close, they were functionally connected, too.