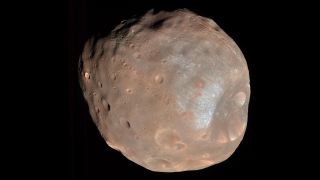 Mars's larger moon, Phobos, is a cratered, asteroid-like object. It orbits so close to Mars that gravitational tidal forces are dragging the satellite down; these forces will likely shatter Phobos to bits in 100 million years or so.
(Image: © NASA)

From Earth's rocky, pockmarked satellite to ice-covered ocean worlds, our solar system is chock-full of moons. Some planets have dozens of them; others don't have any. Astronomers find these satellites very interesting — geologically and, potentially, astrobiologically — and  are eager to send probes to visit lunar destinations, such as Jupiter's moon Europa and Saturn's moon Enceladus.

So it might surprise you to discover that, currently, there is no scientific definition of a moon.

The scholars in charge of such an undertaking would be the International Astronomical Union (IAU), which approves and certifies the names of celestial objects, planetary scientist Francis Nimmo of the University of California, Santa Cruz, told Live Science. And he was unable to find a place where the group defines the term.

Related: How Many Humans Could the Moon Support?

It's possible the IAU is somewhat wary of providing a definition for a moon, given the fallout from the group's 2006 vote to define a planet, which demoted Pluto to mere dwarf-planet status. The controversial decision angered some scientists and members of the public, and it remains a sore spot to this day.

Pluto's demotion even created some cartographic headaches, Nimmo said. The system for defining Pluto's longitude was updated when the world's planetary status changed, because dwarf planets use a different coordinate system than planets. So all maps from before 2006 are essentially upside-down compared to those created after the recategorization, according to The Planetary Society.

This is one of the reasons why definitions matter, Nimmo said. "You need to have a common language so that you're not getting at cross-purposes when you're having conversations. If you don't have definitions of things, you can end up with horrible confusion."

Nevertheless, Nimmo said he doesn't think there is reason to officially define a moon yet. The informal definition that he, and probably the majority of people, have in their heads works just fine. "As far as I'm concerned, a moon is something that orbits a planet or dwarf planet."

This is usually considered to be a consequence of a satellite's origin story. Regular moons are thought to have formed from the same material and around the same time and place as their planet or to have been carved out of the planet by a massive collision, as is suspected of Earth's moon. Irregular satellites, on the other hand, are usually believed to be asteroids or comets that formed somewhere else and were later captured by a planet's gravitational pull.

Of course, Nimmo's unofficial moon definition might itself require updating one day. Some researchers have lately speculated about the possibility of moons that orbit other moons, objects that the internet has naturally dubbed moonmoons. These could challenge the definition Nimmo gave above. But moonmoons remain hypothetical, so perhaps the informal definition can stand.

"I think maybe everybody's clear about what a moon is," said Nimmo.