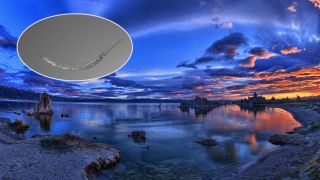 Mono Lake in California contains super salty, arsenic-laced water and very few signs of life. Now, researchers have found eight worm species that thrive in the extreme ecosystem — and one of those species has three sexes, according to a new study.

Mono Lake lies in the eastern Sierra Mountains and serves as habitat for brine shrimp, diving flies, bacteria and algae, but nothing else — or so scientists thought. Biologist Paul Sternberg and his colleagues at the California Institute of Technology thought that microscopic worms called nematodes might lurk in Mono Lake, partially because the wriggling creatures are considered the most abundant animals on the planet, the researchers said in a statement.

Sure enough, during expeditions to the lake, the team found microscopic worms that can withstand 500 times more arsenic exposure than a human can, according to the study, published Thursday (Sept. 26) in the journal Current Biology.

"Mono Lake is famous for being a limited ecosystem in terms of animals ... so it's really cool that they've managed to demonstrate that there are a bunch of nematode species living in there, as well as the shrimp and the flies. It expands the whole ecosystem considerably," Lucy Stewart, a microbiologist at GNS Science in New Zealand who did not participate in the study, told The Scientist.

The researchers visited Mono Lake in the summers of 2016 and 2017, scooping soil samples from dry patches around the body of water, in the tidal zone and within the lake itself. (Limited exposure to the salty, alkaline water is safe for humans, study co-author James Lee, now a postdoc at The Rockefeller University in New York, told The Scientist.) The team unearthed eight nematodes that had a variety of mouth shapes. The distinct mouth on each worm may allow the creature to munch on its preferred diet. Some of the nematodes graze on microbes like cows do on grass, while others prey on animals. Other worms are parasites and leach nutrients from their chosen host.

The research team cultured one worm species from an evolutionary group called Auanema in the lab and found that the creatures display three distinct sexes and carry developing offspring inside their bodies, according to the university's announcement. A look at the worm's genetic code revealed a mutation in a gene called dbt-1, which helps break down the amino acids that make up proteins. The authors suggested that this genetic tweak may be partly responsible for the animal's amazing arsenic tolerance.

Other Auanema species also carry the mutation and show some level of arsenic resistance, though the eight Mono Lake worms appear to be best suited for their particularly toxic environment, The Scientist reported.

"Our study shows we still have much to learn about how these 1,000-celled animals have mastered survival in extreme environments," study co-author Pei-Yin Shih, a graduate student at Caltech, said in the statement. Learning more about these wacky worms could help scientists figure out how to better protect people from arsenic-contaminated drinking water, the authors added, and could generally add to our understanding of how life persists in extreme environments.