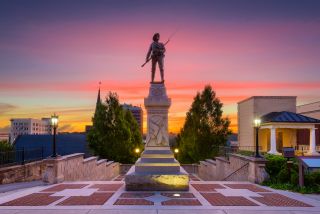 A statue on Monument Terrace in Lynchburg, VA
(Image: © Shutterstock)

Virginia is reporting 10,998 confirmed cases of COVID-19, along with 1,753 people who have been hospitalized and 372 deaths,  according to the Virginia Department of Health. That puts Virginia in the top half of states with U.S. coronavirus cases; it is the 12th most populous state. About 64,518 people have been tested.

Virginia also began listing the total number of outbreaks in the state; that currently stands at 168. Most, or about 92, of those outbreaks occurred in long-term-care facilities, 38 occurred in "congregate" settings, 18 in healthcare settings, 14 in correctional facilities, six in educational settings and one in another, unspecified setting.

—New cases dropped for three days in a row as of Monday (April 20), NBC Washington reported. Gov. Ralph Northam had previously said he wants to see at least 14 days of declining numbers before things can be reopened.

—On Friday (April 17) Northam said the state's rising case count suggested it was not yet ready to reopen. "Just like everybody, I want to get back to being as near normal as we can as soon as possible, but we have to be patient," Northam said during a coronavirus news briefing. Among the criteria required before reopening is feasible: a consistent decrease in case counts for 14 days, and enough testing supplies and contact tracing infrastructure to quickly identify and isolate new cases once they occur, Northam said.

—On Wednesday (April 15) Gov. Ralph Northam announced an extension of executive order 53, which closed nonessential businesses and mandated social-distancing guidelines for those that remain open. The updated order is in effect until May 8.

—About 65% of all known COVID-19 cases in the state are tied to distinct clusters of local transmission, according to WTVR.

—Virginia's total COVID-19 count likely represents a significant undercount, due to limited testing, the Richmond Times-Dispatch reported. For instance, a dashboard that tracks local hospitalization, run by the Virginia Hospital and Healthcare Association (VHHA), notes at least 1,287 people being treated for COVID-19 in the state's hospitals, with another 721 who have been discharged already. The total number of reported cases, at 3,333, is roughly three times the total number of people known to be hospitalized in the state. Because around 80% of COVID-19 cases are thought to be mild and not require hospitalization, there are likely many more undetected cases in the community.  Currently, 4228 people are in intensive care units and 276 are on a ventilator, according to the VHHA dashboard.

—Virginia will begin using genetic testing to analyze samples of SARS-CoV-2 taken from patients in the state. This genetic sequencing will allow researchers to trace the origin and spread of the disease. Genetic analysis will also allow researcher to track whether the virus is mutating, or changing, in significant ways. So far, studies suggest the SARS-CoV-2 virus mutates much more slowly than the influenza virus.

—Northam is allocating $2.5 million to temporarily house some of the 1,500 state residents who are homeless during the pandemic, Richmond.com is reporting. That funding will provide money for food, housing (such as motel rooms) and transportation. The Federal Emergency Management Agency will be providing some funding as well, for those who test positive for COVID-19, for those older than 65, and for those with certain preexisting conditions.

—The University of Virginia is enrolling patients in a clinical trial of an experimental antiviral treatment, remdesevir, made by Gilead Sciences. The trial will enroll 440 people worldwide who are hospitalized with severe COVID-19, to see if the antiviral drug improves their outcomes.

—The Army Corps of Engineers is surveying the state for 41 potential sites of makeshift hospitals. Some candidates include the Exxon Mobil facility in Fairfax, the Hampton Convention Center and a yet-to-be-announced site in Richmond, NBC12 reported.

Timeline of coronavirus in Virginia