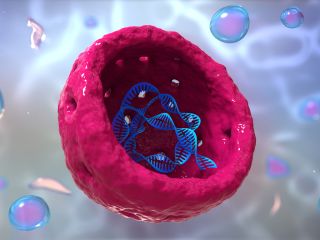 Scientists may have unearthed a missing link between simple and complex cells, which make up all animals, plants and fungi.

Scientists consider single-celled organisms called Archaea to lie between primitive bacteria, that lack a nucleus, and more complex cells, or eukaryotes, on the evolutionary timeline. Like their bacterial cousins, Archaea lack a nucleus, but the microbes contain DNA and DNA-replicating enzymes that closely resemble those in eukaryotes.

Some scientists theorize that eukaryotes evolved about 2 billion years ago from these intermediate organisms, when an ancient archaea grabbed a passing microorganism, sucked it into its cellular belly, and transformed it into a makeshift nucleus. Others suggest that an ancestral archaea sent out wandering "blebs," built from its own cell wall, that latched onto and then integrated helpful single-celled organisms that functioned like modern-day organelles, or the organ-like structures inside cells that perform specialized functions.

The details surrounding this major evolutionary event remain murky, partially because scientists have found little evidence of the transition period between simple and complex cells. But now, researchers have pinpointed a potential bridge between prokaryotes and eukaryotes: a striking similarity encoded in their proteins.

In eukaryotes, certain proteins carry short sequences, known as nuclear localization signals or NLSs, in order to enter the nucleus. Transporter proteins bond with NLSs and then escort another molecule through pores in the nuclear membrane. In essence, NLSs act like a cellular security badge.

Although Archaea lack nuclei, some of their proteins carry NLS-like badges anyway, according to the study published Sept. 10 in the journal Molecular Biology and Evolution. The authors suggest that NLSs predate the origin of the nucleus and may have served as an evolutionary stepping stone that enabled the archaea to gradually evolve  into complex life.

"Nature tends to invent from what it already has," said evolutionary biologist Sergey Melnikov, a postdoctoral researcher at Yale University and co-author of the study.

These NLS badges provide evidence of an intermediate form between simple and complex cells — a finding equivalent to uncovering a bird-like dinosaur or crawling fish as a paleontologist, Melnikov told LIve Science. "This is pretty unique to make a claim that these exist in Archaea...No one has even thought they should be looking for NLSs in Archaea," said computational biologist Aravind Iyer, who studies protein and genome evolution at the National Center for Biotechnology Information, but was not involved in the current study.

But not everyone is convinced: Two experts told Live Science that NLSs may not be the evolutionary smoking gun that shows how simple cells evolved into more complex ones.

Related What Students Want to Know About Cells

Instead of digging through skeletal remains, Melnikov went digging through cells' ribosomal proteins to piece together their evolutionary history. (Ribosomes are cellular factories that help assemble proteins.)

"There are only a handful of genes that are ubiquitous," meaning they are present in all life forms,  Melnikov said. About half of those conserved genes code for ribosomal proteins, he explained, a fact that suggests that the proteins have a lengthy evolutionary legacy, possibly stretching back to the beginning of life itself. In eukaryotes, ribosomal proteins enter the nucleus to be modified before setting up shop in the cytoplasm; they enjoy easy access to the nucleus thanks to their NLSs.

By comparing the structure of ribosomal proteins sampled from all three domains of life — Archaea, Bacteria and Eukarya — Melnikov aimed to spot these signature sequences. The Archaea groups he investigated are among those that can be found in nature today.

Lo and behold, Melnikov and his colleagues unearthed four archaeal proteins equipped with security badges similar to their eukaryotic counterparts. NLS-like sequences appeared in multiple groups of Archaea, so the researchers deduced that the feature had appeared early in archaeal evolutionary history. (In Archaea, however, the NLS probably mainly help the organisms more easily identify nucleic acids, the building blocks of DNA and RNA. While eukaryotic NLSs also serve this function, they are better known for helping proteins into the nucleus.)

The team went on to test whether the NLSs were functionally interchangeable across kingdoms of life, swapping out a eukaryotic badge for an archaeal one. Beneath a light microscope, the archaeal NLSs appeared to work just like eukaryotic NLSs and granted their associated proteins VIP access to the nucleus. Despite sharing the same functions, the NLSs in eukaryotes and Archaea may not be evolutionarily related, experts say.

Iyer, for instance, remains dubious of the finding. NLSs are made up of just five to six protein building blocks, called amino acids. Due to their short length and particular chemical structure, NLSs are statistically likely to appear in proteins by mere chance, Iyer told Live Science.

In other words, the archaeal and eukaryotic sequences may have popped up independently and therefore would not be evolutionarily related. Iyer said he'd be more convinced if further research uncovers archaeal NLSs in additional proteins, ones similar to those that enter the nucleus in eukaryotes.

"In the end, this just shows that these [NLS-like] sequences likely preceded nuclei," Buzz Baum, a cell and evolutionary biologist at the MRC Laboratory for Molecular Cell Biology in England, told Live Science in an email. Archaea that share many genetic similarities with modern eukaryotes still lack nuclei and organelles, he explained, so it’s hard to see how these NLSs led to the development of nuclei.