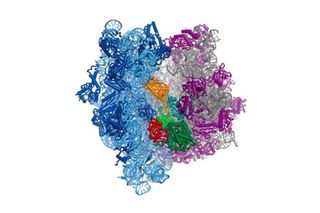 What looks like a jumble of rubber bands and twisty ties is the ribosome, the cellular protein factory. The ribosome is made up of proteins and strands of RNA, a chemical relative of DNA. It has two interlocked parts that behave as a single molecular machine to assemble all of the cell's protein molecules. Some 30,000 different types of proteins enable us to think, move, eat, play and do so much more.

Because the ribosome is central to so many cellular activities in all life forms, it's the target of many drugs, including antibiotics. For example, some antibiotics block bacterial ribosomes — and thus the microorganisms' ability to make the proteins they need to function. A challenge in developing antibiotics is targeting the ribosomes of only the harmful bacteria, not our own ribosomes or those of beneficial bacteria living on and in our bodies.

Since each of our cells has about 10 billion proteins, making them is a 24/7 job. To build proteins, the ribosome's two halves — in the image, blue and purple — ratchet along a chain of messenger RNA (mRNA), reading its genetic instructions and, along the way, adding protein building blocks called amino acids with the help of transfer RNA (tRNA). Once the amino acids are in the right order, the proteins are essentially complete and released into the cell. In bacteria, ribosomes can stitch together 20 amino acids in 1 second.

While scientists have a good understanding of what the ribosome looks like, they are still figuring out exactly how it moves in relation to the mRNA and tRNA molecules. Structural studies funded by the National Institutes of Health offer some clues.

Several teams of researchers in California caught glimpses of the ribosome in the middle of translocation. During this key protein-making step, mRNA and tRNA move quickly through the two halves of the ribosome in a synchronized fashion. A protein called elongation factor G (EF-G) helps control their motion, ensuring the RNA molecules go in the right direction.

The structural images, which show EF-G attached to a bacterial ribosome, suggest that EF-G moves the ribosome by reshaping itself. EF-G's reconfiguration then allows the ribosome to rotate and manipulate mRNA and tRNA in a way that prevents them from slipping backward.

Because many antibiotics interfere with translocation, getting a clearer picture of this process could help pave the way toward new treatments for bacterial infections, including superbugs that have become resistant to current drug therapies.