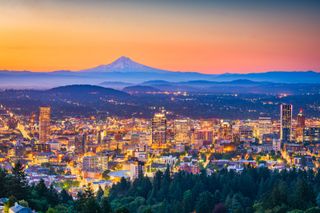 Oregon has confirmed 3,479 cases of COVID-19 as of May 14. A total of 86,679 people have been tested, according to the state's health department. On the list of states with the most U.S. coronavirus cases, Oregon's confirmed numbers put them in the lower half of states impacted by the disease. At least 163 people are currently hospitalized with the virus in the state and 17 patients are currently on ventilators.

The state reported on April 22 that at least 595 people with coronavirus in Oregon have recovered, OregonLive reported.

The state has seen 137 deaths from the coronavirus. According to the Oregon Health Authority, the first individual was a 70-year-old man who died on Saturday (March 14) in Multnomah county. On April 5, OregonLive reported that the individual was Southeast Portland resident Lynn Bryan, a veteran and country-western dance instructor.

COVID-19 has disproportionately affected Oregon’s Hispanic population, according to Oregon Public Broadcasting. About 22% of Oregonians who have tested positive for the coronavirus are Hispanic, compared to 13% for the overall state population.

There have been at least 34 outbreaks of the disease at senior care facilities as of April 9. At least 15 cases are linked to the Edward C. Allworth Veterans' Home in Lebanon, in Linn County, where half of those infected are over the age of 90, according to Oregon Live. On March 31, the news organization reported that cases have been found in 29 nursing homes and other long-term care facilities in the state. The worst outbreak as of April 3 was at Laurelhurst Village in Southeast Portland, where 14 residents and 15 employees were confirmed to have COVID-19, according to OregonLive. The news organization reported on April 11 that at least 24 of the state’s coronavirus deaths were linked to senior care facilities. At least 10 homes for adults with developmental disabilities have also experienced outbreaks.

On May 13, a child in Portland was being treated for a pediatric inflammatory syndrome that has been linked to some rare cases of coronavirus in children, OregonLive reported.

On May 14, there were 191 available adult ICU beds and 784 available ventilators in Oregon, according to the Oregon Health Authority.

Details on Oregon’s plan for a potential reopening were released May 7, with adaptations to the coronavirus including mask-wearing and restrictions on the size of gatherings to 25 or less. On May 1, the state released information on its plan to expand testing and contact tracing by hiring 600 people to perform contact tracing and expanding testing capacity to 15,000 per week.

A Harvard University study released May 7 found that Oregon’s testing capacity is near what is needed to safely lift some social distancing measures, and that the percent positive tests returned in the last week was 3.5%, well under the 10% or less recommended for reopening.

Timeline of coronavirus controls in Oregon

Following business closures, Oregon has seen a surge in unemployment claims. The state saw 23,000 new claims last week, OregonLive reported. On April 1, Gov. Brown ordered a 90-day moratorium on commercial evictions to help small-business owners who may not make rent. This followed a March 22 order preventing law enforcement from evicting tenants who could not pay rent. On April 9, OregonLive reported that 1 out of 8 Oregon workers had lost their jobs in the past three weeks. As of May 14, a total of 396,000 people in Oregon had filed claims for unemployment since pandemic closures started, the Statesman-Journal reported.

On Tuesday, April 14, Oregon Governor Kate Brown released a framework for reopening businesses and lifting Oregon’s stay-at-home order, saying the lift could come after the growth rate of active COVID-19 cases declined, and after hospitals had sufficient personal protective equipment and surge capacity, as well as increased testing capacity and ways to protect vulnerable populations.