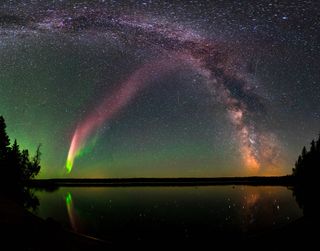 A strong solar storm over Labor Day weekend brought the northern lights farther south than usual, and it may have included something different than the aurora: a solar visitor dubbed STEVE.

Researchers discovered STEVE, short for the Strong Thermal Emission Velocity Enhancement, in 2016. To the casual eye, it appears as a narrow pink or mauve streak in the sky. To scientists, what makes it strange is that its light comes from across the spectrum, without the peaks in particular wavelengths that characterize regular auroras.

"The big thing is we can clearly say now, 'It's not regular aurora,'" University of Alaska Fairbanks researcher Don Hampton, who recently analyzed a STEVE event from 2018, said in a statement. "It's a new phenomenon — that's pretty exciting"”

In 2016, skywatchers and astronomers alike noticed and photographed odd pink bands that didn't look like usual aurora lights, according to  NASA. Further analysis showed that the color wasn't the only unexpected feature of these lights.

The newfound phenomenon dipped farther south than the usual aurora and traveled along different magnetic lines above Earth. Scientists reported in the journal Science Advances that year that the colorful arc of STEVE is the visible signal of a stream of piping-hot particles called the subauroral ion drift.

Now, Hampton and his colleagues have confirmed that STEVE is, indeed, its own thing. Reporting in the journal Geophysical Research Letters, the scientists said that STEVE's wavelengths differ from those of the regular aurora.

The northern lights occur when charged particles from the sun excite electrons in Earth's atmosphere. As a result, these electrons first move to a higher energy state, then settle down to their original, lower energy state. As they do so, each one releases a photon, a particle of light. The color of the auroral light depends on the molecules the charged solar particles hit. If they hit oxygen, green and yellow result, for example, while nitrogen tends to make red and violet.

STEVE, though, consists of light from across the electromagnetic spectrum, with a slight boost in the red range, explaining the phenomenon's mauve color. The new findings confirm that the particles that produce STEVE are quite toasty.

"When you turn your electric stove on, those coils get red hot, right? If you look at it with a spectrograph, you would see broadband emissions," Hampton said in the statement. Similarly, STEVE's broad range of wavelenghts indicate heat. "So, this is like very, very warm atmosphere emissions of some sort."

The researchers made their measurements using a new piece of earthbound equipment called the Transition Region Explorer (TREx) spectrograph, which measures light wavelengths. Using this instrument, the investigators captured a view of STEVE on April 10, 2018, near Lucky Lake, Saskatchewan. As has often happened, STEVE was accompanied by a green "picket fence" phenomenon, which consists of vertical, green bands of light that cross STEVE's usual pink bands. By looking at the wavelengths, the researchers confirmed that the "picket fence" is a variation on the usual aurora.

The next step, Hampton said, is to figure out how or if STEVE affects humanity — besides by giving us a nice show. Solar storms that cause the aurora can also disrupt satellite communications, and it's not yet clear whether STEVE does the same thing or if its impact differs.

"As [STEVE is] a new phenomenon, we want to understand not just why and how it is created, but also how does it affect our infrastructure," Hampton said.