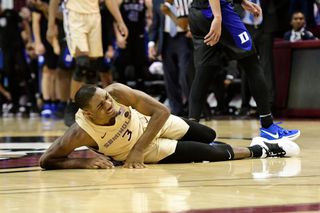 Muscle spasms and cramps can stop even the most elite athletes in their tracks. Trent Forrest of the Florida State Seminoles hit the floor with leg cramps during a match-up with the Duke University Blue Devils on Jan. 12, 2019.
(Image: © David Allio/Icon Sportswire via Getty Images)

Muscle spasms are the sudden, intense and uncontrollable contraction of muscles. They're painful and frustrating, and can stop athletes in their tracks or jolt someone awake in the middle of the night. Also called a muscle cramp or charley horse, a muscle spasm happens when the muscle is fatigued and becomes unable to relax. Stretching is the best remedy, and regular exercise and maintaining a healthy lifestyle can help prevent muscle spasms from occurring.

Cramping during the menses phase of menstruation causes similar discomfort as muscle cramps but for a different reason. Doctors may suggest certain medications or contraceptives to minimize period cramping, although extreme or persistent cramping could be a sign of a more serious health issue. [Diagram of the Human Muscular System (Infographic)]

Muscle cramps during exercise can be debilitating, so it's hardly surprising that people go to great lengths to avoid them. The sports world is full of "secrets" for avoiding cramps, from Epsom salt baths to drinking pickle juice or mustard, most of which are ineffective.

So, what causes muscle cramps during or after exercise? Researchers have hypothesized that exercise cramps might be caused by electrolyte imbalance or dehydration, but that's primarily based on anecdotal evidence. Many experts agree that the strongest scientific evidence points to muscle cramps being caused by a miscommunication between the tendon that controls the muscle and the nervous system. According to a 2009 review by Dr. Martin Schwellnus, a professor and sports medicine physician at the University of Pretoria in South Africa, the miscommunication that causes exercise-associated muscle cramps (EAMC) is most likely the result of muscle fatigue.

If you tend to get muscle cramps, you may have a genetic predisposition based on the type of collagen in your tendons, according to research by Malcolm Collins, a professor of exercise science and sports medicine at the University of Cape Town in South Africa. You're also more likely to suffer cramping during exercise if you've experienced it before, and if you've had injuries to the tendons or ligaments, according to Schwellnus' 2009 review.

The best way to relieve cramps? Forcefully stretch the cramping muscle. This stops the muscle from contracting and allows the relaxation signals to be received.

The simplest way to avoid cramps during and after exercise is to avoid overexertion. Several studies have found that athletes who cramped were often running faster than their normal speeds. Exercising in hot or humid conditions is more tiring and will cause muscles to fatigue faster. Staying hydrated and making sure your body is properly conditioned for exercise will also help stave off the fatigue that causes cramps.

For many people, muscle cramps come not during exercise, but in the middle of the night, and the pain can be excruciating. About 30% of American adults experience occasional nocturnal leg cramps, and about 6% experience them more than 15 times a month, according to a 2017 study published in the journal PLOS One.

The condition is more common in older adults and in people with other health issues, such as hypertension, diabetes or poor cardiovascular health. People who have other sleep problems are also more likely to suffer from leg cramps during sleep.

Once cramps hit, they can be relieved by stretching the muscle. To prevent nocturnal cramping, stretching leg muscles before bed has been shown to help, and there are some prescription medications that have varying levels of effectiveness in preventing and treating cramps. But the best treatment is an improvement in overall health.

Doctors once recommended quinine (the chemical that gives tonic water its bitterness) for nocturnal leg cramps, but because of the drug's potentially serious side effects, the FDA warned doctors not to prescribe it for nighttime leg cramps in 2010. The amount of quinine in tonic water isn't enough to cause health problems for most people, but it's also not enough to prevent leg cramps.

One thing that may help prevent nighttime cramping is untucking the sheets and blankets at the foot of the bed to give your feet room to relax in an upward position. If your feet are pointed all night, your calf muscles are contracted, and that could cause a cramp.

Unlike exercise-associated or nocturnal cramps, period cramps aren't related to overall health or physical exertion. Instead, they are a painful and sometimes debilitating side effect of the uterus contracting to expel the tissue that built up to support a potential pregnancy as part of the menstrual cycle.

Period cramps are the result of a different mechanism than muscle cramps and therefore require a different treatment. Nonsteroidal anti-inflammatory drugs (NSAIDs) such as Advil, Motrin or Aleve alleviate cramps by directly and indirectly decreasing the muscle contractions in the uterus, according to Medline Plus. For people whose period cramps aren't calmed by pain medication, oral contraceptives may be the solution because they limit the growth of the uterine lining in the first place. With less uterine lining to shed, the risk of cramping decreases.

If period cramps are very painful and don't respond to pain medication or hormonal contraceptives, they may be the result of an underlying medical condition such as endometriosis or uterine fibroids. At that point, a doctor will need to do more tests to find the cause.