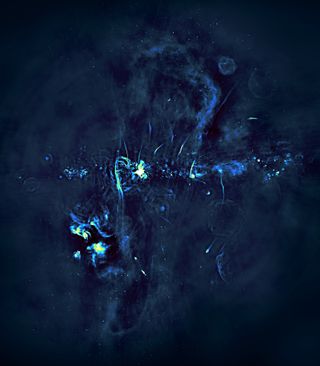 In this radio image of the Milky Way's center, a supermassive black hole (hidden in the bright blue spot in the middle) seethes while gargantuan bubbles of radio energy puff out on either side. Scientists aren't sure what's creating them.
(Image: © South African Radio Astronomy Observatory/ Heywood et al.)

A few million years ago, the center of the Milky Way experienced a bout of bad gas.

Suddenly, some unknown quantity of matter and electromagnetic energy swirling near our galaxy's central black hole erupted in a gargantuan explosion. Electrons moving at nearly the speed of light tore into nearby clouds of dust and gas, causing them to balloon into two enormous, nearly identical bubbles of invisible energy. They're still there today, each one towering some 25,000 light-years high (about a quarter of the width of the Milky Way itself), but you won't see them unless you have an eye for the most energetic radiation in the universe.

Astronomers discovered these galactic fart bubbles in 2010, while looking toward the center of the galaxy with NASA's Fermi Gamma-ray Space Telescope. Now known as the Fermi Bubbles, these massive, gassy blobs appear only in X-ray and gamma-ray light, teasing at an ancient and extremely powerful origin. How and when this galactic bubble-blowing blast occurred, astronomers can't say. But in a new study published today (Sept. 11) in the journal Nature, an international team of researchers reported some fresh clues found by looking to the opposite end of the electromagnetic spectrum, at radio waves.

Using a radio telescope array called MeerKAT to look through the dust clouding our galaxy's navel, researchers in South Africa have detected a pair of bubble-like radio-wave structures bulging out of the galactic center right next to the Fermi Bubbles. While these "radio bubbles" appear much smaller and much less energetic than the frenetic Fermi Bubbles, they likely originated from a similarly cataclysmic event involving our galaxy's central black hole. They may even be part of an ongoing process that's slowly fueling the Fermi Bubbles' inflation, the researchers wrote.

"The Milky Way's central black hole can, from time to time, become uncharacteristically active, flaring up as it periodically devours massive clumps of dust and gas," study co-author Ian Heywood,  an astrophysicist at the University of Oxford in the United Kingdom, said in a statement. "It's possible that one such feeding frenzy triggered powerful outbursts that inflated this previously unseen feature."

Heywood and his colleagues detected the radio bubbles while searching the galaxy's center for a very specific band of short wavelengths that correspond to a type of energy called synchrotron radiation. The process occurs when electrons moving at near light speed collide with magnetic fields, resulting in a distinct radio signal. While mapping this signal near the center of the galaxy, the study authors discovered a long oval of radio energy spanning about 1,400 light-years in diameter, with the galaxy's central black hole sitting at the middle.

Based on the speed of gas flowing near the bottom of the radio bubbles, the researchers estimated the structures to be about 7 million years old, which aligns with younger estimates for the ages of the Fermi Bubbles. It's possible, then, that the two sets of bubbles resulted from the very same cosmic eruption — or, at least, the same sort of explosion.

"The shape and symmetry of [the radio bubbles] strongly suggest that a staggeringly powerful event happened a few million years ago very near our galaxy's central black hole," study co-author William Cotton, an astronomer with the U.S. National Radio Astronomy Observatory, said in the statement. "This eruption was possibly triggered by vast amounts of interstellar gas falling in on the black hole or a massive burst of star formation which sent shock waves careening through the galactic center."

Alternatively, the radio bubbles may be a sign of a new galaxy-scale explosion in the making, the researchers wrote. Given their relatively small size and low energy, the radio bubbles could be the result of small-scale energy bursts that, over millions of years, fuel much larger explosions, creating vast, high-energy clouds like the Fermi Bubbles.

While the detection of these newfound energy bubbles won't solve any mysteries, it does add another piece to the puzzle that is the Milky Way's middle. Seething with giant bubbles of both low-energy and high-energy radiation, our central black hole's indigestion clearly hasn't passed yet.