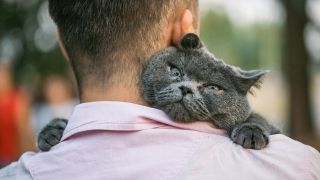 Cat photos can be cat-astrophic for your love life.
(Image: © Shutterstock)

Can posing with a pet help men find dating success? Not if the pet is a cat, scientists say.

Posing with a cat makes men less desirable to women, compared with when they pose without their feline friends, researchers recently discovered.

Overall, women rated cat-less photos of the same man higher on desirable qualities, with more women saying that they would be likely to consider the man for both long-term and short-term relationships, according to a new study.

Related: Photos: See the world through a cat's eyes

Previously, other studies had found that women considered pet-owning men to be "more attractive and dateable" than men who did not own pets, but this effect was usually associated with dog ownership.

This led the scientists to ask: Would men with cats be more desirable than men on their own?

To answer that question, the researchers conducted two surveys: one with 708 participants and one with 680 participants. Study subjects were all American residents between the ages of 18 and 24, and who identified as female and heterosexual.

Depending on the group, the women looked at photos of one of two white men — "Male 1" or "Male 2" — who were in their early 20s and wearing blue button-down shirts. The participants looked at two versions of the photo of each man: either with or without a cat

"Male 2" also scored higher in extraversion and conscientiousness when alone, and higher in agreeableness and openness when pictured with a cat.

And how did holding a cat affect the men's desirability as mates? In the first group, about 30% of those surveyed said they'd be more likely to enter a relationship with the cat-free man, compared with 19% who said they'd be more likely to date the cat-holder. Preferences in the second group were more equally divided, with only about 23% favoring the cat-less man and 19% preferring the cat snuggler.

In both groups, about 50% of the participants found the men equally dateable regardless of whether or not they held a cat.

But were some of the study subjects predisposed to judge cats — and the men who love them — too harshly? While about 19% of the subjects in both groups said they were "cat people," 48% called themselves "dog people" (24% said they were both, while around 10% said they were neither).

Other studies have shown that men who are considered dog-lovers are perceived as being more independent and masculine, the scientists reported. Identifying as a "dog person" may therefore also embrace a cat-centric bias that is pervasive in American culture; branding cat-loving men as "less masculine" and perhaps "creating a cultural preference for 'dog men' among most heterosexual women in the studied age group," according to the study.

Might interpretations about dateability then be applicable to photos of men posing with dogs? Follow-up research could incorporate photos into the survey that show men with dogs, to test subjects' responses to different species, the scientists said.

"Would women find the man alone more or less masculine than a man with a dog? Further, what role would the size/breed of the dog play in these perceptions?" These and other questions "remain an area for future research," the researchers concluded.

The findings were published online June 9 in the journal Animals.