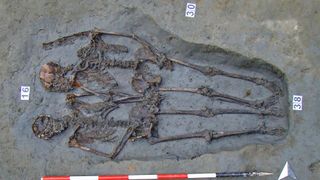 The "lovers of Modena" — two 1,600-year-old skeletons found holding hands inside their grave — are both men, new research reveals.

There are few known examples in the ancient world of skeletons buried holding hands and most of those found have been male-female and not same sex.

However, a team of scientists has now analyzed the skeletons' teeth enamel and identified both skeletons as male, they reported online Sept. 11 in the journal Scientific Reports.

In the study, the scientists found that both skeletons' teeth had a protein called amelogenin isoform Y, which is found only in the enamel of males, the research team wrote in Scientific Reports.

"We suggest that the 'Lovers of Modena' burial represents a voluntary expression of commitment between two individuals," the researchers wrote, adding that they do not know if their commitment was romantic.

In the same cemetery where the hand-holding men were buried, archaeologists found 11 other skeletons, some with injuries suggesting that these people had fought in a war.

"The two 'Lovers' could have been war comrades or friends, died together during a skirmish and, thus, buried within the same grave," the researchers wrote. "Alternatively, the two individuals were relatives, possibly cousins or brothers given their similar ages, sharing the same grave due to their family bond."

They added: "Although we cannot exclude that these two individuals were actually in love, it is unlikely that [the] people who buried them decided to show such [a] bond by positioning their bodies hand in hand." Many of the people in the region had converted to Christianity by the time the men were buried, and authorities held a negative view of same-sex relationships, going so far as to pass laws against it, the researchers noted.

Though authorities in the area had developed negative views toward same-sex relationships by 1,600 years ago, there are reports of some previous Roman emperors having same-sex romantic relationships, openly acknowledging and celebrating them. For example, Emperor Hadrian (reign A.D. 117-138) openly displayed his affection for his male lover Antinous, dedicating games and sanctuaries in his honor.