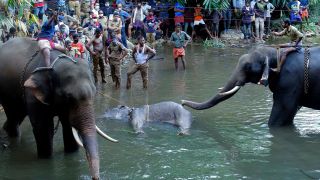 Police and onlookers stand on the banks of the Velliyar River in Palakkad district of Kerala on May 27, 2020, as a dead wild elephant is pulled from the water. The elephant died following injuries it sustained after eating a pineapple filled with firecrackers.
(Image: © STR/AFP via Getty Images)

A post-mortem of a pregnant wild elephant in Kerala, India, that died on May 27, suggests the mother-to-be's death may have resulted from an explosion in her mouth after she ate a fruit stuffed with firecrackers, according to news reports.

"(The explosion) fractured the bones and caused a lot of damage to the mouth. The animal could not eat and became weak. And then died," said Ashique Ali, a local forest officer, CNN reported.

Locals sometimes ward off, and kill, wild boars with firecracker-stuffed pineapples and other sweet fruits, according to CNN. To date, one person, only identified as Wilson, has been arrested for his alleged role in the killing, state forest minister K Raju said today (June 5), The Indian Express reported.

Forest officers initially found the injured 15-year-old elephant on May 23, but they were unable to immobilize her so that she could be treated, Ali said, according to CNN. Two days later, she was seen standing in a river. "In order to give treatment, it has to be immobilized but we could not use a tranquilizer while it is in the water because then the animal can drown," Ali said, according to CNN.

The officers tried using two captive elephants to help guide the injured animal from the stream, to no avail. "For almost 48 hours, the elephant stood in that spot, before succumbing to the deep internal injuries on the evening of May 27," the Express reported.

Individuals from the state's forest department are looking for clues in the area, such as more explosive-laced snares, to find out who was involved in the elephant's death, the Express reported.

"Central Government has taken a very serious note of the killing of an elephant in Mallapuram, #Kerala. We will not leave any stone unturned to investigate properly and nab the culprit(s). This is not an Indian culture to feed fire crackers and kill," India's environment minister Prakash Javadekar wrote on Twitter.

India is home to more than half of the world's wild Asian elephants (Elephas maximus), with 27,312 individuals living in the country, according to the conservation group Elephant Family. The greatest threat to these elephants has been human activity that is destroying their natural habitat, particularly the natural corridors connecting these areas, Elephant Family said.