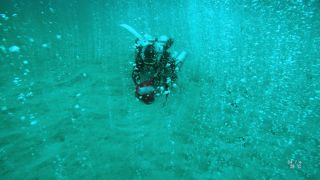 A scientist collects gas samples at the newly discovered Soda Springs in the Philippines.
(Image: © University of Texas Jackson School of Geosciences)

Diving hundreds of feet below the surface of the ocean off the coast of the Philippines, scientists came across a bubbling hotspot of carbon dioxide. And this newly discovered vent might help us predict how coral reefs will deal with climate change, according to a new study.

Bayani Cardenas, a professor in the Department of Geological Sciences at The University of Texas at Austin, accidentally discovered this carbon dioxide fountain while researching the effect of groundwater runoff into the ocean environment in the Philippines's Verde Island Passage.

This strait that runs between the Luzon and Mindoro islands, connecting the South China Sea with the Tayabas Bay, is busy on its surface, serving as a prominent shipping route. It's also busy below the surface, where it harbors one of the most diverse marine ecosystems in the world. And the reefs in this passage, unlike bleached reefs elsewhere, are thriving, according to a statement from The University of Texas.

The researchers named the new hotspot Soda Springs and said that it could have been releasing these bubbles for decades or even millennia.

Soda Springs is a result of an underwater volcano, which vents gas and acidic water through cracks in the ocean floor. The researchers found carbon dioxide concentrations as high as 95,000 parts per million (ppm) near the springs, which is over 200 times the concentration present in the atmosphere, according to the statement.

The levels quickly fell as the gas flowed into the massive ocean, but the seafloor released enough gas to create elevated levels (400 to 600 ppm) and enough acidic water to lower the pH for the nearby coastline. This might thus be an ideal spot for studying how other coral reefs around the world may cope with climate change as it brings more carbon dioxide into their environments, Cardenes said in the statement.

What's more, by tracing levels of radon-222, a naturally occurring radioactive isotope found in groundwater local to the area, the team discovered hotspots on the seafloor where groundwater was being discharged into the ocean. "Groundwater flow from land to sea could have important coastal impacts, but it is usually unrecognized," the authors wrote in the study. "Delicate reefs may be particularly sensitive to groundwater inputs."

The researchers found that groundwater and seawater appeared in different relative amounts in different areas of Soda Springs. This variable mixing means that "the groundwater flow could be contributing to the evolution and functioning of the ecosystem," the authors wrote.

However, the presence of these passageways might also mean that there is a way for pollutants from the island to make it into the coral reefs, Cardenes said in the statement. In the Philippines, where coastal development has surged, people are using septic tanks instead of modern sewage systems, which can easily pump waste into the reefs, Cardenes said.

It's not clear how these reefs thrive in a carbon-dioxide-rich environment, but then again, not much is known about this area. "It's really a big part of the ocean that is left unexplored," Cardenes said in the statement. "It's too shallow for remotely operated vehicles and is too deep for regular divers."

The findings were published on Jan. 3 in the journal Geophysical Research Letters.