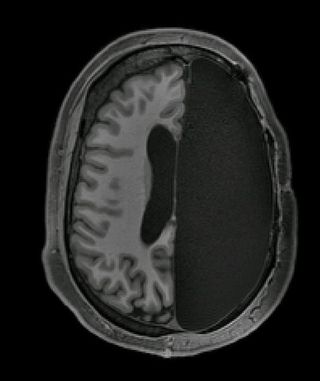 This fMRI scan depicts a cross-section of the brain of an adult who had an entire hemisphere removed.
(Image: © Caltech Brain Imaging Center)

That wrinkly and mysterious organ we carry around in our skulls has an almost magical ability to change and adapt, a characteristic that is particularly apparent in a new study of people who'd had half of their brain removed.

The study, published Nov. 19 in the journal Cell Reports, focused on a small group of people who had a hemispherectomy, a surgical procedure in which half of the brain is removed, during childhood. The findings showed that, despite missing an entire half of this critical organ, participants could function just fine because the remaining half of their brain strengthened, the authors said.

It's known that the brain is very "plastic," meaning that it can constantly form new networks or connections between brain cells. In fact, that's how we learn new skills: the more and more we practice the guitar, for example, the more and more the brain networks responsible for musical prowess will strengthen.

One of the best ways to understand this plasticity is to study patients who had parts of their brains removed. For the new study, a group of researchers at the California Institute of Technology  analyzed the brains of six adults in their 20s and 30s who had hemispherectomies when they were between 3 months old and 11 years old to reduce epileptic seizures.

The authors also analyzed the brains of six controls, or people who had both of their hemispheres in tact. All the participants underwent functional magnetic resonance imaging (fMRI), a technique that measures brain activity by tracking blood flow. The researchers specifically looked at networks in the brain that are involved with everyday functions such as vision, movement, emotion and cognition. They then compared the brain scans to 1,500 brain images published in a database called the Brain Genomics Superstruct Project.

The team found that, among patients with only one brain hemisphere, brain regions involved in the same network (such as vision) worked together just as well as those in healthy patients who had their entire brains intact.

What's more, the authors found that connectivity — and thus communication — between parts of different networks are actually stronger in patients who had a hemisphere removed. In this way, it seems the brain is able to compensate for the loss of brain structure, the authors said.Many of these patients were high functioning, with intact language skills. "When I put them in the scanner we made small talk, just like the hundreds of other individuals I have scanned," lead author Dorit Kliemann, a postdoc at the California Institute of Technology, said a the statement. "You can almost forget their condition when you meet them for the first time."

"When I sit in front of the computer and see these MRI images showing only half a brain, I still marvel that the images are coming from the same human being who I just saw talking and walking and who has chosen to devote his or her time to research," she added.

There are many other cases in the literature that document the brain's amazing ability to adapt to an unexpected situation. For example, a young boy had a third of his right hemisphere removed, which included the part of the brain responsible for sight. But a few years after his surgery, neuroscientists found that the left side of his brain started taking on the missing left side's visual tasks, and he could still see just fine, according to a previous Live Science report.

Another recent study found a small group of women who could smell despite missing their olfactory bulbs, the region in the front of the brain that processes information about smells. Though it's unclear how this happens, researchers think that it's possible another part of their brain took on the task of processing smells, according to another Live Science report.

Now, the authors of the new study are hoping to better understand how the brain reorganizes itself after an injury or stroke, and how some regions are able to compensate for those that are damaged or lost. "Maybe down the line, that work can inform targeted intervention strategies ...  to help more people with brain injuries," Kliemann said.