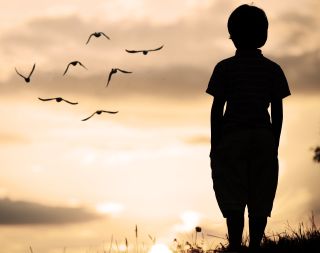 Four years ago, a young boy had a large part of his brain removed. In the years that followed, he showed neuroscientists, once again, how adaptable the brain can be.

The boy — who is referred to as U.D. in the medical literature — had one-third of his right hemisphere removed, including a part of the brain responsible for sight. But according to a new case report about U.D., the left side of his brain started to take on the visual tasks normally reserved for the missing part of the right side of the brain.

The case report was published today (July 31) in the journal Cell Reports.

But let's back up. U.D. had his first seizure when he was 4 years old. The seizures got increasingly worse, and when medications and other treatments failed to work, he had a lobectomy, or surgery to remove a lobe of the brain. During the surgery, which took place when U.D. was almost 7 years old, doctors removed one-third of the right hemisphere of his brain, which included the right side of his occipital lobe (the brain's vision-processing center) and most of his right temporal lobe (the brain's sound-processing center). [3D Images: Exploring the Human Brain]

U.D. is now nearly 11 and seizure-free — but he can't see the left side of the world.

Between the moment light hits our eyes and the time we see an image of the world, the brain does a lot of work.

Both sides of the brain process vision, but the left hemisphere is responsible for the right side of our visual field, and vice versa. When we stare straight ahead, our brain stitches together visual information from both sides of our vision fields into a unified image.

But U.D., without the right side of his occipital lobe, needs to move his eyes and his head to get information from the left side of his world to the remaining vision-processing parts of his brain, said senior author Marlene Behrmann, a professor of psychology at Carnegie Mellon University. Imagine taking a panoramic image and moving the camera to capture the entire scene — that's what U.D. needs to do.

But there's nothing wrong with his eyes, Behrmann told Live Science. U.D. can still "see" in the sense that both of his eyes pick up light information from the left side of his world. But because the right side of his brain lacks a processing center, there's nowhere for that information to go. So it gets lost, she said.

"I suspect that he doesn't have obvious awareness that he is missing that information," Behrmann said. "It's a little bit like, everybody's got a blind spot," but we aren't really aware of it, she added.

Behrmann and her team wondered how U.D. would see and process his world in the absence of a big chunk of his vision-processing system.

So, in the three years that followed his surgery, the team conducted behavioral tests and took images of U.D.'s brain using a functional magnetic resonance imaging (fMRI) machine, all funded by the National Institutes of Health. The behavioral tests included asking U.D. to find specific objects in cluttered images and seeing whether he could detect subtle changes between the images.

Aside from U.D. not being able to see the left side of his world, the team found that he functions just as well as others his age in cognition and vision processing.

His ability to recognize objects and scenes remained unchanged after his surgery and matched the ability of other children his age. "There are some regions of the visual system that mature early and remain stable overtime," Behrmann said. Both hemispheres have the ability to detect objects and scenes, and the left continued to do so even without the right. What's more, his reading proficiency remained above average for his age both before and after surgery.

Will words and faces function together or fight for attention?

Still, while both sides of the brain process most aspects of vision, "the right and the left side of the brain have slightly different visual functions, [and] they're sort of weighted a little bit differently," Behrmann said. While the right is dominant in detecting faces, the left leads in processing words, or reading.

It turns out, in the absence of the right vision-processing center, the left steps in. The left side of U.D.'s brain began to detect faces just as well as the right would have, without having to give up its prowess in detecting words. In fMRI images, both of these functions began to pop up side by side in regions of the brain's left hemisphere, Behrmann said.

This is another striking example of brain plasticity, or how the brain adapts and changes. Neurons, or brain cells, begin to form new connections in the brain and, in doing so, take on new tasks. But the size of the brain doesn't change, so how does the same size area of the brain manage to take on an extra task, without trading off part of its ability to process words? [Slicing of the Brain of Patient H.M.]

"I wish I could answer at the cellular level," Behrmann said. It's unclear at this point, but neurons "can interact with neighboring neurons in new ways, [they] can sprout new connections," she said.

It also remains unclear whether U.D.'s young age factored into the extent of his brain plasticity. It's well established that a child's brain has a greater ability to change than an adult's, Behrmann said. So if the researchers had observed an adult who had a similar lobectomy, the results might have been different, she added.

U.D. isn't the first patient to give neuroscientists a glimpse of what happens when parts of the brain are missing. Perhaps the most famous such patient, Henry Molaison — who was known only as H.M. for many decades — lost his memory after a lobectomy. In the five decades that followed, he provided neuroscientists with an unprecedented view of how memory works in the brain and, some might argue, defined modern neuroscience.