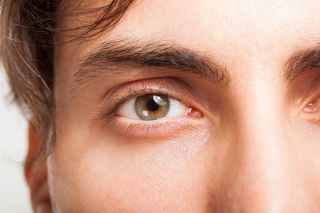 The blind spot of the human eye can be shrunk with certain eye-training exercises, thus improving a person's vision slightly, a small new study suggests.

In the study of 10 people, researchers found that the blind spot — the tiny region of a person's visual field that matches up with the area in the eye that has no receptors for light, and hence cannot detect any image — can shrink 10 percent, with special training.

That amount of change "is quite an improvement, but people wouldn't notice, as we are typically unaware of our blind spots," said study author Paul Miller, of the University of Queensland in Australia. Normally, the brain pulls in visual information from the regions surrounding the blind spot, compensating for it, so people don't usually perceive it.

"The real significance is that our data shows that regions of blindness can be shrunk by training, and this may benefit people who suffer from pathological blindness," Miller told Live Science.

The blind spot of the eye exists because there are no light receptors in a small region of the retina. In this spot, the optic nerve, which extends toward the eye from deep within the brain, reaches the back of the eye, at the retina's surface. The nerve prevents the light receptors that line the rest of the retina from being in that spot. [Eye Tricks: Gallery of Visual Illusions]

In the study, the researchers trained 10 people for 20 days on what researchers call a "direction-discrimination" task. During the task, the investigators used an image of a ring, centered in the blind spot of one of the person's eyes. Waves of dark and light bands moved through the ring, and the participants were asked what direction the waves were moving. In another task, they were asked what color the ring was.

But the size of the ring was manipulated — sometimes, it was made small enough that it fell completely within a person's blind spot, while other times, it was larger, falling within the person's field of vision. When the training began, the exercises were designed so that the people in the study were able to correctly judge the direction of the wave's movement only about 70 percent of the time.

Eventually, the people's eyes were better able to detect the image in their blind spot. At the end of the study, the participants' ability to correctly judge both the direction of the waves and the color of the ring improved.

It does not seem that the improvement was simply due to practicing the task, because the results of doing the training with one eye did not result in any shrinking of the blind spot in the other eye, the researchers said.

Instead, the results suggest that the training increased the sensitivity of certain receptors that overlap or are adjacent to the blind spot, they said. The eye therefore becomes more sensitive to the weak signals that come from near or within the site of blindness.

The study shows that it may be possible to use similar training routines to help people with age-related macular degeneration, which is the leading cause of blindness in developed countries, Miller said. Macular degeneration is the breakdown of the central part of the retina, which is called the macula.

Such training could also be used together with other technologies currently being developed, such as the bionic eye or retinal stem cell therapy, to help people to recover their vision, the researchers said.

The new study is published today (Aug. 31) in the journal Current Biology.