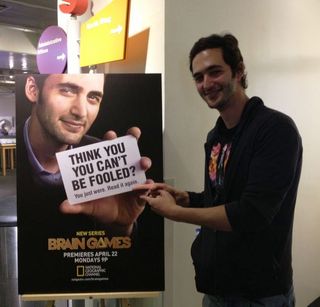 By some accounts, the human brain is the most complex object in the universe. But it is also surprisingly easy to trick.

Mental shortcuts and shortcomings, which allow us to be tricked, also show us how the brain works, said Jerry Kolber, the head writer and executive producer of "Brain Games," a new show on the National Geographic Channel that debuts today (April 22) at 9 p.m. ET/PT.

Here are some simple games designed to trick your mind and teach you more about what's going on upstairs.

Here's a simple question to put your Biblical knowledge to the test. But don't worry, you don't have to go to church or temple every day of the week to get it right: How many of each kind of animal did Moses bring on his ark?

If you answered "two," you're like most people … and you're incorrect. It was Noah who took animals on his craft. [Saint or Spiritual Slacker? Test Your Religious Knowledge]

Most people get this question wrong because the brain is primed by the words "biblical," "ark" and "animals," and goes straight into accessing its Bible-related knowledge to answer, said Jason Silva, the host of the show. This allows the brain to gloss over the fact that Moses is not the right guy.

Mary's mother has four children: April, May, June and …?

If you answered "July," you've been tricked. The correct answer is Mary. Your brain is built to be efficient and looks for patterns in everything, Silva said. Even though the answer is contained in the first two words of the riddle, your brain automatically goes to "July," because that's the next month. This riddle reveals your automatic, or system 1, brain processes at work. This system uses shortcuts in an effort to save the brain energy needed to do other things, like running the body and keeping a person alive.

Look at the above photo. Does anything about it appear off to you? If not, look again. And again. As you may or may not notice, the word "you" is repeated. Your brain doesn't notice this because it is unnecessary to comprehend the sentence, Kolber told LiveScience. This glossing-over reveals another automatic process that literally blinds a person to certain unnecessary, extraneous information, Kolber added.

If you focus your eyes on a blinking red dot in the center of a spinning circle, you will notice something strange: the yellow dots disappear. That's because attention is like a spotlight that can only shine on one thing at a time, Silva said. In this case, the eyes (and, ultimately the brain) assume that the dots are part of the background, and thus adapt to the dots' presence and disregard them as unimportant, Kolber said. [Video – See the Dots Disappear]

"Seeing is not believing," Kolber said. "The eye truly can un-see things."

The flash lag experiment illustrates this gap between perception and reality (click on the link to play the game). Follow the instructions to the game and click on the spot where you think the dot is at the time of the flash. You will likely think the dot is well ahead of where it actually is.

The experiment shows the "difficulty in accurately detecting the position of an object at the time of another event," according to researcher and author Dean Buonomano. That's due in part to the delay between when something happens and when you fully see and realize the event has happened, Kolber said.

Quick: which way is this bus headed? (The image shows a bus without any markings on its side.) The correct answer is to the left — the entrance on a bus is always on the right side, which must be facing away. Children, with more recent experience on buses, are much better at answering this question than adults. It illustrates how important cues and former experience are in interpreting a sight or situation.

Here's a simple game that you can play with a friend. Hold out a dollar bill to your companion and have him or her place a pointer finger and thumb a few inches away from the money, ready to grab it. Then drop the bill. The person won't be able to snatch the cash before it falls (your subject isn't allowed to move his or her whole arm, just the fingers).

The reason has to do with time and mental processing speed. Everything you see happens basically one-tenth of a second before it registers in your brain, the amount of time needed to assemble the vast amount of information coming in through the eyes and other senses, and made sense of by the brain, Silva said. Moreover, your eyes can only see in two dimensions; 3D vision is a product of the brain, he added. Besides seeing the bill drop, your brain also has to tell your fingers to move to catch the bill. By the time this happens, the bill is already out of reach.

Given all that, it's actually a wonder how quickly our brains can function — but sometimes we overestimate our reaction time, Kolber said.

This knowledge has led Kolber to drive slower and put more distance between him and cars in front of him on the road — many accidents can be avoided by taking these kinds of precautions and giving yourself more time. Indeed, one point of the "Brain Games" show is to apply brain science to everyday life.

"We start with a game, we blow your mind, we explain the science and then talk about how it could be applied to your life," Silva said.