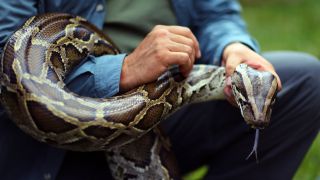 Jeff Fobb holds a Burmese python as he speaks to the media at the start of the Python Challenge in 2013 in Davie, Florida.
(Image: © Joe Raedle/Getty Images)

The state of Florida is preparing to host the Super Bowl in January … and to wipe out as many invasive pythons as possible.

On Dec. 5, Florida Gov. Ron DeSantis announced the date for Python Bowl 2020. The annual Python Challenge recruits hunters in Florida and trains them to spot, capture and remove or humanely kill the big snakes. The python hunter who removes the most pythons will win an ATV; the person who captures the largest individual snake will be awarded $2,000.

"The protection of our environment and natural resources is critical," DeSantis said in a statement. "Invasive Burmese pythons have decimated local wildlife and pose a massive threat to natural food chains and flora and fauna."

Burmese pythons (Python bivittatus) have become a persistent problem in the Florida Everglades. Probably released accidentally by pet owners, these snakes have gotten a foothold in Florida's marshy ecosystem, breeding rapidly. They eat native mammals, chow down on bird eggs and even sometimes tangle with American alligators. According to the Florida state government, pro and rookie python wranglers have removed 9,305 pythons from the ecosystem as of November 2019. But female pythons can lay as many as 100 eggs at a time, making elimination of the invasion a challenge.

The Python Challenge: Python Bowl 2020 is set to begin on Jan. 10 and continue until Jan. 19, ahead of Miami hosting Super Bowl LIV. Those who register must complete an online or in-person training on how to safely capture pythons. Seven parcels covering 1.5 million acres of public lands in southern Florida will be open for the competition.

A "pro" category of the competition is open to those who make a living hunting pythons. A "rookie" category encompasses everyone else. Pythons are typically not a threat to humans, but Florida's invasive snakes can grow to gargantuan proportions: A Miami man killed an 18 foot, 8 inch-long (5.6 meters) python in 2013. Most pythons captured are in the range of 6 to 7 feet (2.1 m).

Recently, researchers have discovered that some of the Burmese pythons found in Florida are hybrids, containing some DNA from Indian pythons (Python molurus). This interbreeding, which probably took place in pythons while they were in the pet trade, might make the snakes particularly hardy to different climate and environmental conditions.