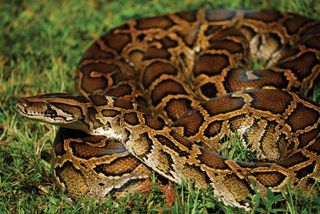 Burmese pythons, native to southern Asia, have taken up a comfortable residence in the state of Florida, especially in the Everglades. In addition to out-competing native wildlife for resources and habitat, the pythons are eating the native wildlife.
(Image: © Sarah L. Stewart)

After destroying the mammal populations in the Florida Everglades, pythons have turned to attacking birds to feed their 16-foot-long hunger. The snakes are not only eating the area's birds, but also the birds' eggs straight from the nest.

"This finding is significant because it suggests that the Burmese python is not simply a sit-and-wait predator, but rather is opportunistic enough to find the nests of birds," study researcher Carla Dove, of the Smithsonian Museum of Natural History, said in a statement. "Although the sample size is small, these findings suggest that the snakes have the potential to negatively affect the breeding success of native birds."

Rangers started noticing the Burmese python's presence in 2000, when two snakes were removed from national lands. The number of pythons has skyrocketed, with more than 300 pythons being removed from the Everglades every year since 2007. Scientists suspect initially these invasive species escaped from homes that were keeping them as household pets. [Album: Giant Pythons Invade Everglades]

The researchers monitored the python's diet by combing through their stomach contents. A previous study of 300 pythons captured in the Everglades National Park found that more than 25 species of birds made up about 25 percent of the python's diet.

In the latest study, the researchers describe three cases in which they've found eggs inside pythons, proof that the invasive snakes are attacking nests. Most snakes that eat eggs have special adaptations to puncture the shells, but because the pythons are so large, and eat relatively small eggs, they can just swallow them whole, the researchers suspect.

The three cases include a 14-pound (about 6 kilogram) male python stretching some 8.5 feet (about 2.6 meters) in length, which they collected near a house in Florida's Miami-Dade County. The snake threw up 10 guinea fowl eggs soon after it was captured. The team discovered the remains of two bird eggs in another python collected for the study — a female weighing 30 pounds (about 13 kg), with a length of more than 10 feet (3 m).

The shell fragments from the two bird eggs were analyzed and compared with eggshell samples in the Smithsonian collection. They turned out to be from a bird called a limpkin, a large wading bird found in marshes and listed as a "species of special concern" by the Florida Fish and Wildlife Conservation Commission.

"Our observations confirm that invasive Burmese pythons consume not only adult birds but also eggs, revealing a previously unrecognized risk from this introduced predator to nesting birds," Dove said. "How frequently they are predating on bird eggs is hard to know."

The study is detailed in the March 2012 issue of the journal Reptiles & Amphibians: Conservation and Natural History.