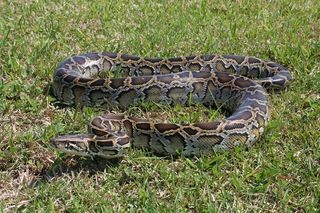 Burmese pythons, such as this one, have been found to consume a wide variety of wildlife, including alligators, wood storks and Key Largo woodrats.
(Image: © National Parks Service)

Burmese pythons, famous invaders of the Florida Everglades, can take down animals as large as alligators and deer.

But the snakes pose little threat to humans and it's rare that the pythons will attack people without first being provoked, scientists say.

Researchers solicited reports of unprovoked snake attacks in Everglades National Park over a period of 10 years. Of the five incidents they compiled, all involved field biologists conducting research in remote, flooded areas of the park. Two of the attacks resulted in minor puncture wounds, while the other incidents caused no harm. [Alien Invaders: Destructive Invasive Species]

"The strikes did not appear to be defensive, but were more likely associated with aborted feeding behavior," study author Bob Reed, a wildlife biologist and herpetologist with the U.S. Geological Survey, said in a statement.

In other words, the snakes may have seen these biologists as potential meals and tried to attack, acting on some visual or thermal cue — only to quickly realize the humans would be too big to eat.

"Because humans were far too large for most of the snakes to ingest, because some of the strikes were aborted before making contact, and because none resulted in constriction attempts, we tentatively suggest that these were cases of 'mistaken identity,'" Reed and his co-author, retired Everglades National Park scientist Skip Snow, wrote in their report, published in the Wildlife Society Bulletin.

What's more, if the pythons were attacking defensively, they would have struck the front of a person, not the side or the rear, as was the case in all five of these reports, Reed explained.

"Additionally, Burmese pythons rely on being secretive and evading detection as their primary means of avoiding interactions with people, and typically don't strike until provoked," Reed said in a statement.

Between 1978 and 2009, large constricting snakes killed 16 humans in the United States; at least seven of these deaths were attributed to captive Burmese pythons, the researchers say. In the wild, the species seem to pose little threat to people worldwide. The authors of the study said they could only find one report of a free-ranging Burmese python fatality: the death of an infant in Hong Kong about a century ago.

Native to Southeast Asia, Burmese pythons established a breeding population in Florida several decades ago as a result of the international pet trade. The nonvenomous constrictors now number in the tens of thousands in the state. The largest one ever captured in Florida measured over 18 feet (5.4 meters). While posing little threat to humans, the snakes are thought to be partly responsible for the decline in bobcats, foxes, raccoons and other mammals in the region.

"Our guidance to visitors with respect to Burmese pythons is the same as for our native wildlife — please maintain a safe distance and don't harass the wildlife," Dan Kimball, superintendent of the park, said in a statement. "With respect to controlling Burmese pythons, we are working diligently with our state, federal, tribal and local partners to manage this invasive species and educate the public on the importance of not letting invasive species loose in the wild."