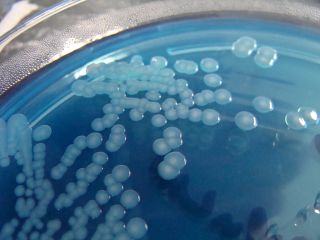 The patient arrived at the hospital with what looked like a run-of-the-mill bacterial infection. But then, things turned much more serious: The patient developed a "flesh-eating" infection that ultimately required the amputation of both arms and both legs.

What caused the infection to spin out of control? It turned out it wasn't an infection with a single type of bacteria, but rather a mashup of four different strains of the same species.

Now, scientists know exactly how these bacterial strains work together to decimate tissues in the body, as reported in a new study. And the findings may have implications for treating these so-called "polymicrobial" infections.

In the recent case, Dr. Ashok Chopra, a microbiology and immunology professor at the University of Texas Medical Branch and his colleagues found four distinct strains of the same bacterial species, known as Aeromonas hydrophila, in the infected patient. Together, the microbes launched an attack more lethal than any individual strain could have orchestrated alone.

The study, published Nov. 11 in the journal Proceedings of the National Academy of Sciences, suggests that three of the bacterial strains allow the fourth to enter the bloodstream and lay waste to tissues throughout the body. A. hydrophila is a rare cause of flesh-eating infections, but Chopra speculated that other flesh-eating bacteria, such as E. coli, may also employ a similar attack strategy. However, more research would be needed to show this, he said.

"They could [use] different toxins … but they may have similar 'cross-talk' among different strains," Chopra said. "At the end of the day, I see this having much wider implications in clinical settings."

When the infected patient was admitted to the hospital, doctors used traditional diagnostics to determine which pathogen was to blame. They identified A. hydrophila, a microbe commonly found in freshwater and brackish environments, from lakes to rivers to drinking water, according to the clinical reference site UpToDate. When ingested, the germ may cause diarrhea or infect soft tissues in the body. But when A. hydrophila enters an open wound, a horrifying disease called "necrotizing fasciitis" may ensue.

The rare infection rapidly enters and kills connective tissues throughout the body, leaving the affected person vulnerable to organ failure and death, according to the National Organization for Rare Disorders. The flesh-eating infection must be treated quickly with antibiotics or surgery, as was the case with the patient in the new study. In the end, only a quadruple amputation could save the patient from the rampaging microbes.

The patient's initial diagnosis didn't reveal why the infection took such a sudden and deadly turn. Traditional diagnostic tests identify different bacterial species based on the proteins and toxins the bacteria produce, Chopra explained, so the nuance of the case was initially missed. "But if you [look] at the DNA level … it's a completely different story," he said.

In two previous studies, Chopra and his co-authors isolated bacterial samples from the patient and analyzed all the genetic material contained within the microbes. The analysis revealed the four distinct bacterial strains, referred to as NF1 through 4, that together caused the near-fatal infection. But remarkably, when operating in isolation, none of the four strains triggered a lethal infection in mouse models. To learn how the microbes interact to cause serious infection, the authors tweaked the bacteria strains' DNA and infected mouse models with multiple strains at once. By altering the germs' DNA, the scientists could swap out the tissue-killing arsenal of each and determine which weapons made the mixed infection so lethal.

It turns out that each bacterial strain has "different arsenals to affect the host," Chopra said.

Three of the four strains, NF2 through NF4, contain genetic instructions to produce a toxin called exotoxin A, or ExoA, which prevents infected cells from building new proteins. On their own, these three strains still break down muscle tissue and gain access to the bloodstream, but the immune system quickly clears the pathogen from the body.

In contrast, the last of the four strains, NF1, appears less vulnerable to immune attack but cannot concoct its own ExoA. When working alone, the microbe remains largely isolated near the site of infection, blocked in by walls of muscle tissue. This is where bacterial teamwork comes into play. When multiple strains of A. hydrophila infect the body, the ExoA-producing strains tear down the muscular hurdles, allowing NF1 to go on a "flesh-eating" rampage.

Interestingly, the three other strains stay put near the site of infection, while NF1 takes the lead and surges through the bloodstream. The authors found that NF1 actually produces a unique toxin that kills not only tissues in the body, but also the other strains of A. hydrophila; the NF1 strain itself itself holds the antidote to its own homemade poison.

The new findings may have implications in the search for new microbial diagnostic tools, Chopra said. When doctors think of mixed infections, they commonly think of infections caused by two or more completely distinct bacterial species, he said. But the current case shows that different strains of the same species can also team up to cause disease, and each strain may be vulnerable to different antibiotic treatments.

"When we treat with a given antibiotic, we're clearing an organism out of the body," co-author Rita Colwell, a microbiologist at the University of Maryland, said in a statement. "But if there's another organism that's participating in the infection and that's also pathogenic, then any antibiotic treatment that doesn't also target that organism may just be clearing ground for it to grow like crazy."

But not everyone agrees with this prediction.

"Do I think [the new study] will change the clinical treatment of necrotising fasciitis? Not necessarily," Dr. Amesh Adalja, a physician and infectious disease expert at Johns Hopkins University in Baltimore, who was not involved in the study, told Live Science.

Since necrotising fasciitis acts so quickly, by the time doctors pinpoint each strain causing the infection, it may be "too late to make a difference," Adalja said. Identifying different strains could help guide the treatment of milder A. hydrophila infections, where a particular combination of bacteria might worsen the outcome, he said. But as it stands, those strains could be spotted only with "sophisticated genetic tools" not usually found in clinical settings.

Still, the research elucidates the ways in which multiple bacterial strains can come together to spread within the body, wreaking havoc, Adalja said. It would be interesting to investigate whether more common bacteria employ the same strategies to spread infection in the body, he added.