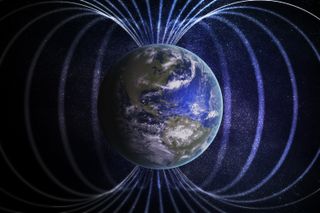 Hot liquid that churns around Earth's outer core powers a gigantic magnetic field that's been hugging our planet since its infancy, protecting it from harmful solar radiation. But this magnetic field is known to get restless — and a couple of times every million years or so, the poles flip, and magnetic south becomes magnetic north and vice versa.

Now, a new study suggests that the magnetic poles can flip much more frequently than scientists thought. That's what seems to have happened around 500 million years ago during the Cambrian period, when Earth's creatures were undergoing evolutionary growth spurts, transforming into more complex life-forms.

To understand the workings of the magnetic field during this time, a group of researchers from the Institute of Physics of the Globe of Paris and the Russian Academy of Sciences collected sediment samples from an outcrop in northeastern Siberia.

In the lab, they determined the orientation of magnetic particles trapped in the sediments by slowly heating them to extreme temperatures to demagnetize them. The orientation of the particles corresponded to the magnetic field direction (which way magnetic north pointed, for instance) at the time and place the sediment was deposited. The researchers fine-tuned the age of the sediments by dating trilobite fossils found in the same layers, and were thus able to approximate when the magnetic fields flipped.

The team found that around 500 million years ago, the planet's magnetic field flipped about 26 times every million years or so — the highest frequency ever suggested. That's "extreme," considering that until recently, five flips per million years was considered very high, said lead author Yves Gallet, research director of the French National Center for Scientific Research at the Institute of Physics of the Globe of Paris.

But perhaps "just as interesting" is that shortly after this time, within a few million years, the frequency of flipping dropped off extremely quickly, Gallet said. Between 495 million and 500 million years ago, the magnetic field started flipping at a rate of about one to two times every million years.

The "dominant idea for many years" was that the frequency of magnetic field reversals would only evolve gradually across tens of millions of years, he said. But "here we show a sudden change in reversal frequency occurring on a million-year timescale."

It's clear that the process that generated the magnetic field in the outer core 500 million years ago was very different from that observed today, he added. But what, exactly pushed Earth's magnetic field to flip so frequently, is unclear, he said. One possibility is that the frequent reversals could have been caused by changes in thermal conditions at the boundary between the liquid-iron outer core and the mantle driven by mantle dynamics, he said. Recent studies have also suggested that the inner core may have begun to cool and solidify around 600 or 700 million years ago. This process could have also played a role in the functioning of the magnetic field, he said.

The last magnetic field reversal happened around 780,000 years ago, but although there are concerns that it might happen again soon — which might temporarily weaken the field, causing harmful solar radiation to reach us — it's likely not "soon" in terms of human years.

"It is important to remember that the timescale we are considering for the evolution in magnetic reversal frequency is at least a few millions of years," Gallet said. At this scale, the magnetic field reversals could evolve to be more or less rapid. But "a magnetic polarity reversal is not for tomorrow," he added.

The findings were published online Sept. 20 in the journal Earth and Planetary Science Letters.