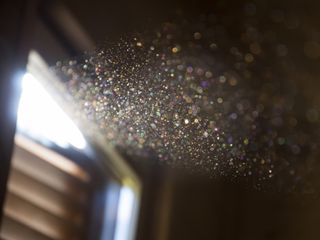 Bacteria enter our homes, gyms and workspaces by hitching rides on our skin or blowing in through an open door. Once inside, these invader microbes might help indoor germs in the surrounding dust become resistant to antibiotics, a new study suggests.

Antibiotic medications work by disrupting the inner workings of harmful bacteria, by weakening their outer membranes, undermining their ability to replicate DNA or preventing them from building important proteins. Although antibiotics offer an effective remedy for infections like pneumonia, tuberculosis and gonorrhea, over time, germs can evolve to resist the treatment. Antibiotic-resistant bacteria pose a serious threat to public health, and scientists are now trying to invent new solutions to deal with the impervious microbes.

Now, research suggests that bacteria from outside our homes and offices may deliver antibiotic-resistant genes to indoor germs that might not otherwise acquire an immunity to antibiotics. In this way, previously treatable pathogens could become newly resistant to antibiotics, according to the new study, published Jan. 23 in the journal PLOS Pathogens.

Related: 6 Superbugs to Watch Out For

In the past, many scientists have hunted for antibiotic-resistant bacteria lurking in hospital settings, but fewer groups have looked into how prevalent the bugs may be in other public spaces or individual homes. A few studies have found that antibiotic-resistant genes are swirling in indoor dust, beyond the confines of a health care facility, but no one knows whether these genes can be transmitted between bacteria. The question is a relevant one, given that people living in urban areas spend an estimated 87% of their time indoors, according to the 2001 National Human Activity Pattern Survey.

"The concern is that, even if there aren't many pathogens, the chance for exposure is very high because we spend so much time [indoors]," said Erica Hartmann, senior author on the new study and an assistant professor of civil and environmental engineering at Northwestern University in Illinois. In the worst-case scenario, a harmless microbe from the outdoors could deliver an antibiotic-resistant gene to a dangerous pathogen waiting indoors; the toughened bug could then infect a person and be difficult or impossible to treat.

"We never really know where the next antibiotic-resistant organism is going to come from," Hartmann told Live Science. With that in mind, Hartmann and her colleagues set out to collect microbial samples from more than 40 different indoor locations, from fitness clubs to recreation centers to yoga studios.

Dust serves as a helpful catalog of all the microbes that have passed through an indoor space, so the team gathered dust from their sample locations and combed through all the genetic material contained within. The analysis revealed more than 180 antibiotic-resistant genes in the dust, but the researchers wanted to check whether any of these genetic snippets could feasibly spread between bacteria.

Bits of DNA can travel between microbes by hitching a ride on special genetic structures called integrons, transposons and plasmids. By searching for these structures near antibiotic-resistant genes, Hartmann and her co-authors identified more than 50 genes that could hitchhike between microbes. Hoping to catch these jumping genes in action, the team cultivated one of their bacterial samples in a petri dish and attempted to trigger a gene transfer.

But the genes stayed put.

Related: Top 7 Germs in Food that Make You Sick

"The genes exist within these mobile … elements, but we were not actually able to get the genes to transfer," Hartmann said.

That doesn't mean the germs aren't prompted to share their genes under different conditions, she added. In an indoor environment, free-floating bacteria might become "stressed" by the dry air, a lack of nutrients, unfavorable temperatures or antimicrobial cleaning products. Stressed-out microbes are known to donate genes to nearby bacteria, but as of yet, no scientist has witnessed the transfer of an antibiotic-resistant gene between microbes, Hartmann said.

The new study suggests that these genetic exchanges may be unfolding in our neighborhood gyms and atop our yoga mats, but only time will tell whether the transfers represent a major source of antibiotic-resistant bacteria. Even if the transfers are taking place, they may mostly occur between harmless microbes that don't cause disease in humans, Hartmann noted.

"Nobody has to put on a hazmat suit right away," she said. "We are surrounded everywhere we go by microbes, and the vast majority of those microbes are not harmful."

Looking forward, Hartmann said, she and her colleagues aim to learn how, when and where antibiotic-resistant bacteria might share their genes with pathogens of consequence to human health. Specifically, the researchers plan to study whether common cleaning products could trigger these gene transfers and thus promote the spread of antibiotic resistance.

"If you were going to change something about the way you clean, the products you use, what could we do to limit antibiotic resistance?" Hartmann said. She hypothesized that seemingly mundane choices, like the kind of disinfectant you use, could make a huge difference in the fight against ever-evolving bacteria.