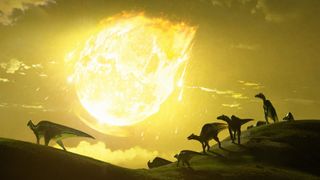 The flaming space rock that slammed into Earth and wiped out the dinosaurs, struck at the worst possible angle (for the dinosaurs, that is), new research suggests.

Colliding with an enormous, fast-moving cosmic projectile would have been disastrous under just about any circumstances. But this giant space rock also hit the planet at a steep angle, causing the "deadliest possible" outcome by releasing much more gas and pulverized rock than it would have with a shallower approach, researchers recently discovered.

Scientists modeled the path of the meteor as it hurtled toward Earth, creating the first 3D simulations to trace the event from start to finish: from the asteroid's approach, to the crash, to the formation of the giant crater in its entirety. The asteroid closed in on its target from the northeast and struck at an angle of about 60 degrees above the horizon, the study found, maximizing the quantity of gas spewed into the atmosphere — with catastrophic results for global climate.

That crash was around 66 million years ago, ending the Mesozoic era with a bang. The event triggered global climate change and led to mass extinction, wiping out 75% of all life on Earth — including all non-avian dinosaurs. A scar from the impact remains to this day, as a massive circular basin underneath Mexico's Yucatán Peninsula known as the Chicxulub crater, measuring around 124 miles (200 kilometers) wide.

They also examined asymmetrical structures in the crater at subsurface depths of nearly 18 miles (30 km), to visualize the direction and angle of the asteroid as it struck. Though previous studies had modeled the crater's appearance at the moment of impact, this is the first time that researchers have used deeper structural data to model the crater during the impact's later stages, as it shifted and settled into its final shape. Working backward from this formation gave the scientists a more accurate view of the asteroid's approach, the scientists wrote in the study.

Take an object the size and mass of this ancient asteroid and send it hurtling toward Earth at tens of thousands of miles per hour at an angle 60 degrees above the horizon, and it would have blasted a crater that closely matches the structure of the Chicxulub crater, according to the simulations.

Compared with most other impact angles, ejecta from such an impact would have produced "the worst-case scenario" for the planet, spewing up to three times as much sulfur and carbon dioxide into the atmosphere as other impact angles did, the models showed.

This steep-angled trajectory "was among the worst-case scenarios for the lethality on impact," lead study author Gareth Collins, a professor of planetary science in the Department of Earth Science and Engineering at Imperial College London, said in a statement.

"It put more hazardous debris into the upper atmosphere and scattered it everywhere — the very thing that led to a nuclear winter," Collins said.

The findings were published online May 26 in the journal Nature Communications.