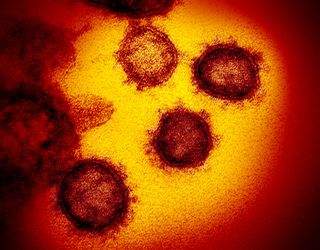 This is a transmission electron microscope image showing the new coronavirus emerging from the surface of human cells.
(Image: © NIAID-RML)

The new coronavirus, like all other viruses, mutates, or undergoes small changes in its genome. A recently published study suggested that the new coronavirus, SARS-CoV-2, had already mutated into one more and one less aggressive strain. But experts aren't convinced.

In the study, a group of researchers in China analyzed the genomes of coronaviruses taken from 103 patients with COVID-19, the disease caused by SARS-CoV-2, in Wuhan, China, the epicenter of the outbreak. The team found differences in the genomes, which they said could be categorized into two "strains" of the coronavirus: the "L" type and the "S" type, the researchers wrote in the study, which was published Tuesday (March 3) in the journal National Science Review.

The researchers found the "L" type, which they deemed the more aggressive type, in 70% of the virus samples. They also found that the prevalence of this strain decreased after early January. The more commonly found type today is the older, "S" type, because "human intervention" such as quarantines may have reduced the ability of the "L" type to spread, researchers wrote in the paper.

However, Nathan Grubaugh, an epidemiologist at the Yale School of Public Health who was not part of the study, said the authors' conclusions are "pure speculation." For one thing, he said, the mutations the study authors referenced were incredibly small — on the order of a couple of nucleotides, the basic building blocks of genes, he said. (SARS-CoV-2 is about 30,000 nucleotides long).

These slight changes likely wouldn't have a major impact, if any at all, on the functioning of the virus, so it would be "inaccurate" to say that these differences mean there are different strains, he said. In addition, the researchers looked at only 103 cases. "It's a very small sample set of the total virus population," Grubaugh told Live Science. Figuring out the mutations that a virus underwent worldwide takes "a nontrivial amount of effort and sometimes takes years to complete," he said.

Other scientists agree. The finding that the coronavirus mutates into two strains with the L strain leading to more severe disease "is most likely a statistical artifact," Richard Neher, a biologist and physicist at the University of Basel in Switzerland, wrote on Twitter. This statistical effect is probably due to early sampling of the L group in Wuhan, resulting in a "higher apparent" case fatality rates, he wrote.

When there's a rapidly growing local outbreak, scientists quickly sample the virus genomes from patients, resulting in the overrepresentation of some variants of the virus, Neher wrote. The authors of the paper acknowledge that the data in their study is "still very limited" and they need to follow-up with larger data sets to better understand how the virus is evolving, they wrote.

Knowing that such papers would come out during this outbreak, Grubaugh published a commentary in the journal Nature Microbiology on Feb. 18. with the title "We shouldn't worry when a virus mutates during disease outbreaks."

The word mutation "naturally conjures fears of unexpected and freakish changes," he wrote. "In reality, mutations are a natural part of the virus life cycle and rarely impact outbreaks dramatically." RNA viruses, or those that have RNA as their main genetic material instead of DNA, including SARS-CoV-2, mutate constantly and do not have the mechanisms to fix these "mistakes," as human cells do, for example.

But most of these mutations negatively affect the virus. If mutations are not beneficial to the virus, they are typically eliminated through natural selection, the mechanism of evolution whereby organisms better adapted to their environment tend to survive. Other mutations survive and get embedded into the "average" genome of a virus.

Typically, multiple genes code for traits such as a virus's severity or ability to transmit to other people, Grubaugh wrote. So, for a virus to become more severe or transmit more easily, multiple genes would have to mutate. Despite high rates of mutation among viruses in general, it's unusual to find viruses that change their mode of transmission between humans over such short time scales, he wrote.

So, what does all of this mean for the development of a possible vaccine?

These viruses "are still so genetically similar that these mutations shouldn't alter a new vaccine," Grubaugh said. It's "unlikely that the developers have to worry about this." Once the vaccine is out, however, the virus could adapt to it and develop resistance, he said, but considering that other RNA viruses — such as those that cause measles, mumps and yellow fever — didn't develop resistance to vaccines, that scenario is unlikely.

In fact, these mutations help scientists trace the steps of the virus, Grubaugh said.

For example, a group of researchers in Brazil recently isolated SARS-CoV-2 from two patients confirmed to have COVID-19 and sequenced the complete genomes of both samples of the virus. They found that not only did the genomes differ from each other, but they were also very different from the genomes of the virus samples sequenced in Wuhan, China, the researchers wrote in a report that wasn't peer-reviewed but published on a forum on Feb. 28.

The coronavirus taken from one patient in Brazil had a genome similar to that of a virus sequenced in Germany, and the virus from the second patient resembled that of the coronavirus in the United Kingdom. That means these two patients are linked to cases in Europe but not to each other, Grubaugh said.