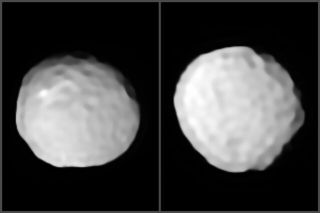 A pair of images show two views of Pallas with its pock-marked surface.
(Image: © Massachusetts Institute of Technology)

New images reveal that one of the strangest asteroids in the solar system is also the most covered in craters.

Pallas, at 318 miles (512 kilometers) in diameter, is the third-largest asteroid in the asteroid belt between Mars and Jupiter, accounting for about 7% of the region's mass. When Pallas was discovered in 1802, it was just the second asteroid ever found, and its discoverer, German astronomer Heinrich Wilhelm Matthäus Olbers, originally classified it as a planet.

Pallas has long been known to follow a strange path through space. It plunges in and out of the main belt as it follows a path around the sun that's heavily skewed compared to the orbits of the planets. Pallas flings itself northward and southward above and below the plane of Earth's orbit around the sun, and a collection of smaller objects trails the asteroid.

Now, new images show the consequences of that idiosyncratic journey.

"From these images, we can now say that Pallas is the most cratered object that we know of in the asteroid belt. It's like discovering a new world," MIT astronomer Michaël Marsset, lead author of a paper describing the images, said in a statement.

Asteroids in the asteroid belt move very fast. But they also tend to have highly similar orbits, the researchers wrote. When these space rocks slam into one another, the collisions can be cataclysmic, producing craters, but most of that speed is canceled out.

It's a bit like driving a truck at 80 mph (129 km/h) down a highway and the car next to you, driving 82 mph (132 km/h), swerving a bit and knocking its bumper into yours: It would cause some damage, but as long as both drivers kept control of their vehicles, everyone would probably be OK. Just as the vehicles would have some dings, objects in the asteroid belt often have lots of craters resulting from collisions. Some of those pockmarks are quite big. But Pallas' has an unreasonable number of huge craters.

When Pallas passes, it's as if a freight train plowed diagonally across that highway at speed, blasting cars t into shards of steel and plastic, and then continuing on its merry way mostly unbothered thanks to its huge momentum. Billions of years of this pattern, which occurs twice every time Pallas orbits the sun, has left the asteroid so pockmarked that it looks like a golf ball in the low-resolution images.

Pallas experiences two to three times more collisions than Ceres or Vesta, the two largest objects in the asteroid belt, and "its tilted orbit is a straightforward explanation for the very weird surface that we don't see on either of the other two asteroids," Marsset said.

The images, captured using the SPHERE instrument at the European Southern Observatory's Very Large Telescope in Chile, show that Pallas has at least 36 craters that are larger than 18 miles (30 kilometers) in diameter, including a 250-mile-wide (400 km) impact crater on the asteroid's equator likely made by a collision with a 25-mile-wide (40 km) object. Pallas also has a bright spot on its southern hemisphere that researchers suspect may be a big salt deposit. The paper was published Feb. 10 in the journal Nature Astronomy.