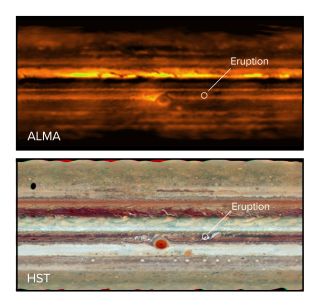 Powerful storms have erupted on Jupiter, and they're screwing up the planet's beautiful belts of white and brown.

The storms, which resemble the anvils of cumulonimbus thunderheads on Earth, are blurring the neat lines separating Jupiter's different atmospheric bands. In a similar process to how anvil-shaped thunderstorms form on Earth,towers of ammonia and water vapor rise through Jupiter's outer layer of clouds before spreading out and condensing as white plumes that stand out against the cloud surface. Along the way, they create swirls at the borders of different bands, disturbing them and mixing up their browns and whites into swirls.

"If these plumes are vigorous and continue to have convective events, they may disturb one of these entire bands over time, though it may take a few months," Imke de Pater, a University of California, Berkeley, astronomer, said in a statement. (Convection is a process where warmer, less dense fluid rises through colder fluid.)

De Pater was lead author of a paper accepted for publication in The Astronomical Journal, describing observations of these disturbances using the Atacama Large Millimeter/Submillimeter Array (ALMA) in Chile and the Hubble Space Telescope.

Related: 10 Places in the Solar System We'd Most Like to Visit

Under normal circumstances, the researchers explained, ammonia ice clouds make up the thin top layer of brown and white clouds visible as the planet's bands we are used to seeing in space images. But that ammonia doesn't rise higher or penetrate much deeper into the mostly hydrogen and helium atmosphere of the planet. It also makes observing the innards of the planet difficult, making it hard to figure out what's causing these storms.

They aren't, however the first examples astronomers have detected of disturbances in Jupiter's atmospheric bands. These events seem to occur periodically, the researchers wrote, citing examples dating back to the 1990s — many of which included flashes of lightning.

"We were really lucky with these data, because they were taken just a few days after amateur astronomers found a bright plume in the South Equatorial Belt," de Pater said. "With ALMA, we observed the whole planet and saw that plume, and since ALMA probes below the cloud layers, we could actually see what was going on below the ammonia clouds."

The researchers peered through the cloud tops to find that the plumes originate deep in the gas giant's atmosphere. Warm pockets of ammonia and water rise together, reaching a point 50 miles (80 kilometers) below the cloud tops where the water condenses into liquid droplets, releasing heat. That boost of energy propels the ammonia the rest of the way through the outer clouds where it can form anvil-shaped white plumes.

It's not clear today how much disruption these plumes will cause on the largest planet in our solar system, but researchers will certainly be keeping an eye on them to see how this all plays out.