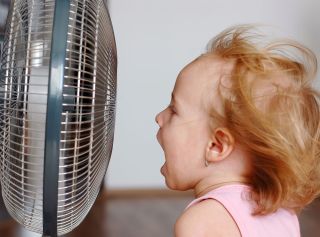 "Temperate is basically the jiggling motion of atoms. The more they jiggle and move about, the hotter the temperature!" So exclaimed the late Richard Feynman in a 1983 interview with the BBC.

Knowing this renowned physicist's words, one might wonder why a pocket of air in motion — i.e. wind — feels cooler than still air. When you sit in front of a fan on a hot day, the blades propel air molecules toward you, speeding them up and smacking them against your skin. Why don't these energetic molecules burn?

The explanation lies in the fact that there are two types of motion on the atomic scale. One feels hot; the other feels cold.

When atoms and molecules are jiggling really rapidly in random directions, they feel hot against our skin. But the collective motion of all the atoms and molecules in a single direction doesn't affect their overall temperature. To the contrary, when air bombards us, it cools us down, because it increases the rate at which heat leaves our bodies. [How Hot Is Hell?]

Heat is removed from the skin by processes of evaporation, convection, radiation and conduction. For any of these to happen, molecules in the air must bump against the hot (i.e. rapidly jiggling) molecules of our skin, so that some of that heat energy can be transferred from the latter to the former molecules. After they've made contact, the air molecules must move away, carrying what used to be our body heat with them in the form of jiggling.

The faster the turnover of air molecules bumping against and then moving off our skin, the cooler we become. That's why, on a 90-degree day, you can find me in front of a fan.