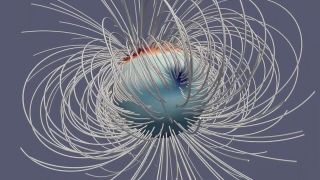 Juno, the NASA probe that has orbited the gas giant since 2016, passes over Jupiter's polar regions ever 53.5 days, collecting data on the magnetic forces that produce ultrabright auroras above the huge planet. In a new paper, published July 8 in the journal Nature Astronomy, researchers working with Juno's data discovered that the electric currents passing through Jupiter's magnetosphere — the region of its atmosphere richest with magnetic field lines — don't act as expected. The probe found less direct current — current that constantly flows in one direction -- than physicists predicted. It was only about 50 million amperes, an incredibly powerful current, but not as high as theoretical models of Jupiter's magnetosphere suggested would be present.

That finding suggests that "alternating current" — current that flickers back and forth — plays a much bigger role in producing Jupiter's auroras than anyone realized, the researchers wrote. On Jupiter, as on Earth, auroras are a product of whirling currents in magnetic fields interacting with high-energy particles from the sun. [10 Places in the Solar System We'd Most Like to Visit]

"These observations, combined with other Juno spacecraft measurements, show that alternating currents play a much greater role in generating Jupiter's aurora than the direct current system," Joachim Saur, an author of the paper, said in a statement.

On Earth, we typically think of alternating and direct currents (AC and DC) in terms of electronics. Famously, in the late 19th century, inventors Thomas Edison and Nikola Tesla disagreed sharply over which method should be used to deliver power to electrical devices. DC power doesn't convert as easily between different voltages, according to the U.S. Department of Energy (DOE), so Tesla wanted to turn the more-easily convertible AC into the standard. Edison, guarding his DC-dependant patents, resisted the change and spread misinformation that AC was more dangerous, according to the DOE.

Tesla won out in the end, and AC became the standard for U.S. power plants. However, according to the DOE, direct current has regained favor as more battery-powered devices have come to market. Your lights are probably running on AC power, but there's a good chance the device you're reading this on relies on DC. (That's why your laptop requires an AC adapter.)

In the space around Jupiter, the proportion of AC to DC isn't determined by feuding pre-modern inventors, but by the behavior of ions in the planet's atmosphere. Jupiter has powerful currents than Earth for several reasons, including its huge size, its fast rate of spin and the excess of charged particles (ions) pumped out from volcanoes on the moon Io.

That such a large proportion of those currents are AC seems to be a result of turbulence in the planet's magnetic fields, the researchers wrote. Turbulence in this sense refers to the disordered way in which the magnetic fields' shape and directionality fluctuates. And that turbulence is producing different effects at each of Jupiter's two poles.

In the time Juno has orbited Jupiter, the planet's north pole has experienced about half the current of the south pole, the researchers wrote. That seems to be a result of the much more complex arrangement of magnetic field lines in the north, which interrupts the flow of currents. In the south, they wrote, the magnetic field lines are "smoother."

This research on Jupiter's powerful magnetic fields, the researchers wrote, could inform their understanding of Earth's weaker magnetic field — humanity’s main protection against harsh solar particles. Some researchers already suspected turbulence produced a significant proportion of currents around our planet. This work seems to lend credence to that idea.