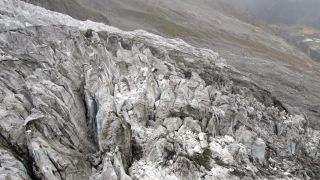 Part of the Planpincieux Glacier in the Mont Blanc massif is in danger of collapse.
(Image: © Val D'Aosta Region Press office handout/EPA-EFE/Shutterstock)

Last spring, scientists came out with a dire prediction that an increasingly warming planet could melt most of the glaciers in the European Alps by 2100. The melting seems to have begun.

Now, part of one of those glaciers is already at the brink of collapse, officials warned this week.

Italian officials have ordered the evacuation of mountain huts and closed down roads near the Planpincieux Glacier that sits on the slopes of the Grandes Jorasses mountain, in the Mont Blanc mountain range. The glacier lies along the French-Italian border, near the town of Courmayeur. But this giant beast is not sitting still.

The glacier is moving 20 to 24 inches (50 to 60 centimeters) a day on average, according to a report by the Valle d'Aosta regional government and the Italy-based nonprofit Fondazione Montagna Sicura (the Secure Mountain Foundation), which led to the warning. That means that 8.8 million cubic feet (250,000 cubic meters) of ice could potentially give way and cause powerful avalanches, according to a statement by the city of Courmayeur in Italy.

Related: In Photos: The Vanishing Glaciers of Europe's Alps

The mayor of Courmayeur, Stefano Miserocchi, said global warming is to blame. "These phenomena testify once again how the mountain is in a phase of strong change due to climatic factors, therefore it is particularly vulnerable," Miserocchi said in the translated statement. "In this case, it is a temperate glacier particularly sensitive to high temperatures."

Temperate glaciers, like the glaciers of the Alps, are generally residing at temperatures that are just about at the melting point of ice — meaning a small change in temperature can have a "major impact" on them, according to the U.S. Geological Survey. In a worst-case scenario, where average global temperatures rise by up to 8.6 degrees Fahrenheit (4.8 degrees Celsius) by 2100, 95% of the glacial ice in the Alps would disappear, according to a study published in April in the journal The Cryosphere. In the best-case scenario, where global warming is curbed before it reaches relentless levels, and global temperatures rise by less than 3.6 F (2 C), only two-thirds of the Alps glaciers would be expected to disappear.

As to the fate of this popular hiking destination … a waiting game. It's unclear when the collapse will happen, but officials note that the warning is precautionary and isn't a threat to tourist or residential areas, according to The Guardian. As to the fate of our planet … it shouldn't be a waiting game, scientists said in a big climate report released this week. Students around the world took to the streets last Friday (Sept. 20) to protest inaction on climate change and world leaders traveled to New York to participate in the U.N. Climate Change Summit.