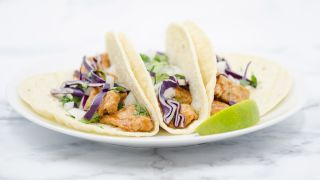 It sounds like a magic trick: Creating meat out of thin air. But that's the gist of the idea behind a new meat alternative that one company claims to make with "air-based protein."

The company, a Berkeley, California-based startup called Air Protein, recently announced the creation of "air-based" meat, which is made from elements found in air, according to a statement from the company.

But is it really possible to make "meat" out of air? Sort of, but it requires the help of special microbes.

Specifically, the company uses single-cell microorganisms, known as hydrogenotrophs, which ultimately convert carbon dioxide into protein. In other words, the microbes act like plants in that they can convert CO2 into food, the company says.

The "probiotic production process" combines the air elements (like carbon dioxide, oxygen and nitrogen) with water and mineral nutrients to make a nutrient-rich protein, the statement said. The process is similar to making beer or yogurt, but not quite the same as fermentation, Lisa Dyson, CEO of Air Protein, told the San Francisco Chronicle. (Indeed, the process of making beer requires grains, and yogurt requires milk.) The resulting protein powder is tasteless, but can be made to look and taste like familiar foods, the Chronicle reported.

The idea for air protein was inspired by NASA research from the 1960s. The agency was looking for ways to produce food for long space missions with limited resources and came up with the idea for a "closed-loop system" in which microbes would convert exhaled air into food, the company says.

Experts said the idea of making proteins out of air in this way sounds feasible.

"Given that proteins have a large nitrogen-containing group in them and air is over 70% nitrogen, it would make sense to me that you could siphon the nitrogen and carbon from the air to form the backbone of amino acids, which are what all proteins are made of," said Dana Hunnes, a senior dietitian at the Ronald Reagan UCLA Medical Center in Los Angeles, who is not involved with Air Protein.

Hunnes noted that the company doesn't describe exactly how it is doing this, but it may be using carbon-fixing or nitrogen-fixing bacteria "that are somehow able to produce amino acids from the molecules carbon and nitrogen floating in the air."

The company sees its air-based protein as a more sustainable way to feed the planet's growing population. The company notes its method doesn't require land resources and is not subject to the whim of weather conditions. What's more, the company claims its technology can make protein in a matter of days, much faster than the time it takes to raise livestock or grow crops.

Still, Hunnes notes the company does not discuss the cost of its production process, so it's unclear whether it's truly cost-effective. The company also did not mention in its statement how much water is used in the production process. Air Protein did not immediately respond to a request for comment on the cost-effectiveness of its method or the amount of water used.