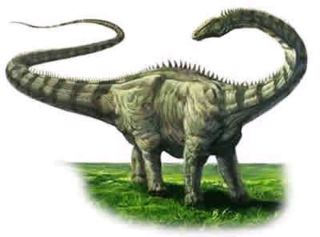 The long necks of the largest dinosaurs that ever lived might have been raised high after all, a new study now suggests.

The sauropod dinosaurs, which included titans such as Brachiosaurus, Diplodocus, and Apatosaurus (once known as Brontosaurus), are well-known for the very long necks they usually sported. The lengthy neck extended the animal's reach for grabbing food.

However, it has recently proven controversial as to whether sauropods actually ever held their heads up high to dine on hard-to-reach leaves because of all the energy needed to pump blood to such heights. Most researchers, for instance, do agree that Apatosaurus and Diplodocus likely kept their necks low while grazing.

Now, at least for some of these sauropods, research suggests the goliaths did indeed hold their heads up high.

Andreas Christian, a functional morphologist at the University of Flensburg in Germany, investigated Euhelopus zdanskyi, a moderately sized sauropod that lived during the Early Cretaceous sometime between 130 million and 112 million years ago. It was estimated to weigh some 8,400 pounds (3,800 kilograms) and roughly 36 to 39 feet (11 to 12 meters) in length from nose tip to tail tip.

The neck and head of Euhelopus together were thought to have weighed 460 pounds (210 kg), and the distance from the base of the neck to the snout stretched about 15 feet (4.6 m). After calculating the stresses the cartilage at its neck joints must have felt given this weight and length, Christian found the most likely pose it adopted was somewhat like a giraffe's — a nearly straight neck inclined at roughly 45 degrees from the ground that would have taken little work to raise up vertically for a few minutes.

Although pumping blood to such heights requires a lot of energy, Christian discovered this proved cost-effective if food was spread out, as the energy gained from being able to forage on hard-to-get lofty leaves would be much less than if they otherwise had to move their massive bulks long distances to feed. Similar findings held true for Brachiosaurus.

"Distribution of food was important for the optimal feeding strategy," Christian said. Different sauropods may have used their necks in different ways depending on the kinds of vegetation they were most used to feeding on, he added.