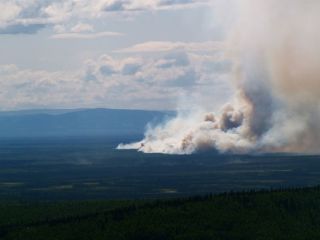 As wildfires grow in number and strength worldwide, they are unleashing mercury that has polluted wetlands in the north since at least the dawn of the Industrial Revolution.
(Image: © Michigan State University)

As wildfires grow in number and strength worldwide, they are unleashing mercury that has polluted wetlands in the north since at least the dawn of the Industrial Revolution.

These infernos in the north of North America are releasing mercury at levels up to 15 times greater than fires elsewhere in the continent. The key, researchers note, is that climate change is making northern wetlands more vulnerable to burning.

Mercury can damage the brain and lead to birth defects. Normally, atmospheric circulation carries mercury spewed from industry northward, where it settles down, for instance, in cold wet soils in Alaska and Canada.

"Peat lands have done us a real service by locking up mercury before and during the entire Industrial Age," researcher Merritt Turetsky, an ecologist at Michigan State University in East Lansing, told LiveScience.

Over the past few decades, forest fires are burning more frequently and intensely. In 2004 and 2005, Alaska and western Canada saw the largest wildfire seasons in recorded history. Increasingly, northern forests and wetlands also are growing drier due to climate change, Turetsky said, leaving them more vulnerable to fires.

To see if this rise in fires will send mercury stored away in northern soils back into the air, where it could then have toxic effects on food webs, Turetsky and her colleagues in United States and Canadian government labs measured how much mercury western Canadian forests and peat lands store in their soils and vegetation. The researchers team also studied more than five years of natural fires and prescribed burns and sampled smoke plumes to measure atmospheric mercury levels as fires blaze.

Their fire emission models suggest wildfires can release much more mercury into the atmosphere than was previously suspected.

"We're talking about mercury that has been relatively harmless, trapped in peat for hundreds of years, rapidly being spewed back into the air," Turetsky said. "There is a massive amount of mercury stored in northern peat lands that could soon be mobilized."

These findings suggest officials may have to pay attention to mercury levels in people and fish after wildfires, especially if fires continue to grow more severe in northern regions, Turetsky said. She and her colleagues reported their findings August 19 in Geophysical Research Letters.